DISCUSSIONS WERE HELD WITH VARIOUS REPRESENTATIVES FROM ACROSS PARLIAMENTARY SEGMENT 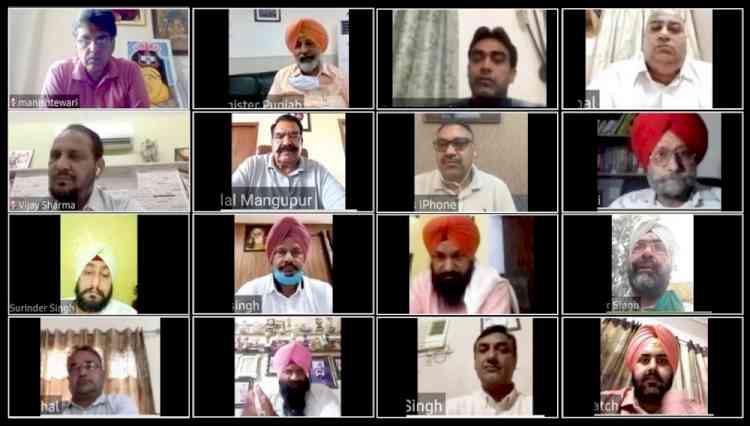 Nawanshahr: Shri Anandpur Sahib MP Manish Tewari today reviewed of the situation in the Lok Sabha constituency in view of the COVID-19 pandemic and the lockdown discussions were held with various representatives from across the parliamentary segment.
In addition to Health Minister Balbir Singh Sidhu in the video conference, Balachaur MLA Darshan Lal Mangupur, Punjab Youth Congress President Brinder Singh Dhillon, Punjab Large Industries Development Board Chairman Pawan Dewan, chairman of different market committees, boards and trusts, Youth Congress Delegates also participated.
Tewari assured that due to the lockdown, people of constituency will not face any difficulty. the situation continues to improve in most parts of the LS segment.
In collaboration with the district administration and police, health department teams are constantly fighting against Corona .He said that despite the challenge of Corona, the Punjab government under the leadership of Chief Minister Captain Amarinder Singh was following the social distancing, buying wheat from the farmers of the state. Whereas due to the lockdown, efforts are on to bring back the area’s people trapped in different parts of the country to their homes.
Health Minister Sidhu said that the health department has expedited the testing in the state. More focus is being laid on Jalandhar and Patiala in particular, where more cases of corona infection have been reported recently. He expressed happiness that in these challenging conditions the performance of the civil hospitals of the state has been much better than the private hospitals.
He revealed that the state had received Rs 72 crore aid from the Centre, while the delegation led by MP Tewari had asked for Rs 150 crore. Meanwhile, he thinks that the lockdown should be extended for another 10 days to further improve the conditions.
While MLA Mangupur revealed that many people have returned to the assembly, stranded in other parts of the country due to the lockdown.
However, many people are still stranded, for whom he appealed to MP Tewari and Chief Minister Captain Amarinder Singh to speed up the efforts to bring them back.
MP Tewari had earlier assured to bring the trapped people back to their homes in different states through video conferences with constituencies representations, the subject which he had discussed with CM of Punjab Captain Amarinder Singh.
At the same time, other people who participated in video conferencing also expressed their views. Market committee chairman said that farmers are not being allowed to face any problem in the mandis and the directions of the social distancing and government are being followed.
Satbir Singh chairman, Planning Board Nawanshahr, Varinder Sharma Tinku, chairman  Planning Board Mohali, Sukhwinder Singh Saini, chairman Improvement Trust Ropar, Kanwarbir Singh Sidhu president DYC Mohali, Surinder Singh president DYC Ropar, Hira Khepar president DYC Nawanshahr, Gurinder Singh Billa vice chairmen BC commission Punjab, Satwinder Singh Cherriya, Chaman Singh chairmen Market Committee Nawanshahr, Harjit Jadli chairman Market Committee Balachor, Daravjit Singh Punian chairman Market Committee Banga, Karnal Singh chairman Market Committee Chamkour Sahib, Mohan Singh chairman Market Committee Gharshankar, Pankaj Kirpal and Aman Slatch General Secretary DYC Mohali were also the part of the meeting.

KANTA ALLARIA APPEALS PEOPLE IN HARYANA TO HELP THE POOR