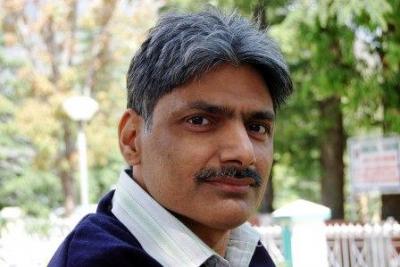 Manoj Dhiman has served as a Staff Correspondent with Indian Express, both at Jalandhar and Ludhiana in Punjab, for more than two years from August, 2000 onwards. Later, he joined Hindustan Times and worked for more than eight years at Ludhiana (Punjab) and Dharamshala (Himachal Pradesh). He resigned as Principal Correspondent from Hindustan Times in the year 2011. He also did work as principal correspondent and deputy news editor for Daily Post, at Ludhiana and Jalandhar. In between, he also worked as content writer for Delhi-based real estate group, M/s Earth Infrastructures Ltd for about 12 months.   Earlier, Dhiman had worked as a Stringer for The Tribune Group, Times of India (Delhi Edition), Press Trust of India (PTI) and Daily Ajit, for several years at Ferozepur Cantt in Punjab. Dhiman is the youngest son of Late Shri H.R.Dhiman (Journalist). Dhiman has penned fiction books too. His creative works are as under: Late Night Party- A short story book in Hindi (later, it was also translated into English), Baarish Ke Boondein- A poetry book in Hindi, Shunya Ke Or- A novel in Hindi. During his childhood, he made thousands of cartoons that appeared in various dailies such as Punjab Kesari (Jalandhar), Jag-Bani (Jalandhar), Vir Pratap (Jalandhar), Hind Samachar (Jalandhar), Dainik Tribune etc and also in magazines such as "Lot Pot", "Jagriti" etc. His creative works for children also appeared in Sunday Editions of The Tribune. Besides, he wrote poems, stories etc for various dailies and magazines during his childhood. He is recipient of Best Story Writer by Daily Vir Pratap during his childhood.