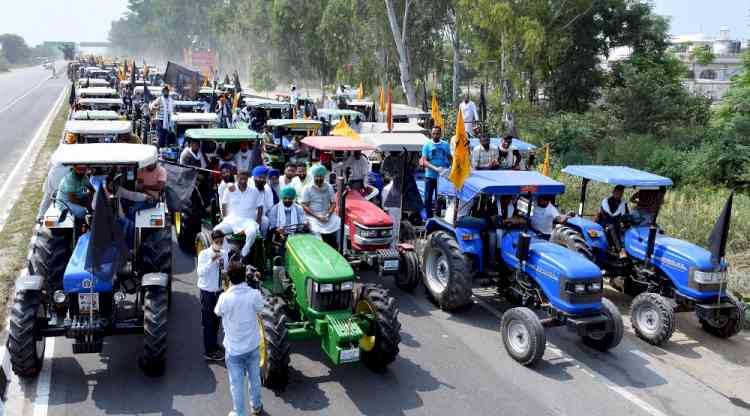 Dakha (Ludhiana): Shiromani Akali Dal (SAD) workers and farmers today held a massive ‘tractor rally’ from Sidhwan Bet to Baddowal to demand revocation of the three Agricultural bills, saying the anti-farmer bills would throw the ‘annadata’ at the mercy of corporate houses.

The rally, which witnessed slogans of Kisan Ekta Zindabad and Sadde haq aithe rakh, was led by Dakha legislator Manpreet Singh Ayali and traversed from Sidhwan Bet to Savadi and Mullanpur to reach Badowal. Farmers drove their tractors holding black flags and shouting slogans demanding the NDA government revoke the Bills immediately or be ready for an even more intense agitation.

Addressing the farmers at Savadhi Anaj mandi, Mr Manpreet Ayali said the SAD had been taking up the need for revocation of the Agricultural ordinances immediately after they came into being following apprehensions expressed by farmers as well as party workers. He said it was unfortunate that the BJP did not take the farmers and as well as the SAD into confidence while framing the Agricultural ordinances. He said the centre also failed to allay the apprehensions of farmers and did not secure the MSP regime by making its continuation a part of the Bills. “It is due to this that Biba Harsimrat Kaur Badal resigned from parliament”, he said while welcoming the step and saying it had been taken in the interest of the farming community”.

Mr Ayali also took on chief minister Capt Amarinder Singh for betraying the farmers. He said the chief minister had earlier backstabbed farmers by taking false vows in the name of the holy Gutka Sahib and the Dasam Pitah. “Now he has tried to deceive farmers yet again by becoming a part of the high-powered committee constituted to frame the Agricultural Bills on the one hand even as he is shedding crocodile tears for the cause of the farming community on the other. Farmers have seen through this sham and now only trust the SAD to secure justice for them in this case”, he added.

The Dakha legislator also announced on the occasion that he was first and foremost a farmer. “I have been protesting against the Agricultural ordinances ever since they came into being. I will not hesitate to make any sacrifice for the cause of the farmers if need be. I will always side with the farmers and their cause”, he added amidst slogans of “Ayali teri soch te pehra deyange thok ke”.

The SAD leader appealed to party workers to participate whole heartedly in the ‘chakka jam’ announced for tomorrow as well as all subsequent programmes given by the party to force the central government to revoke the anti-farmer Agricultural bills.

Webinar by PUAA on teaching and learning tools