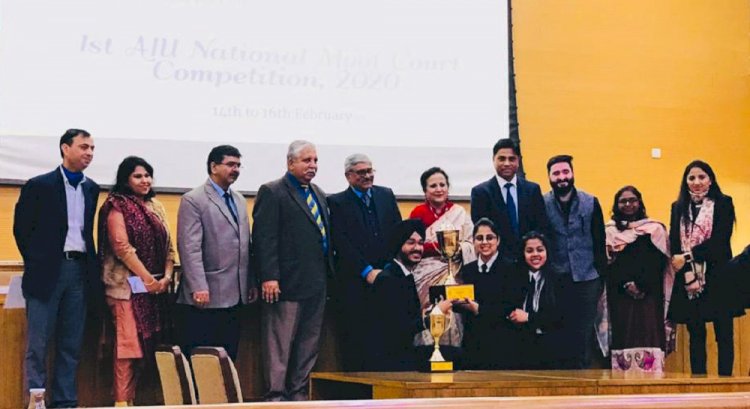 LPU students presented themselves with all subtlety leaving behind other participating students of different Law Institutions, from all across the country. LPU students excelled in preliminary rounds slated to be among 42 Teams; advanced rounds’ quarter-finals among 8 Teams; semi-finals among 4 Teams; and, finals. LPU students’ dominance worked out and they lifted the scintillating trophy. LPU Chancellor Mr Ashok Mittal congratulated both students and their teachers for the hard work they are upholding.

In fact, Association of Indian Universities (AIU) has recently added ‘National Moot Court Competition’, in this year-2020, to its various activities in diverse fields.  This is to provide significant opportunity to various students of Law institutions imparting legal education to compete and hone their skill of arguing the case in a ‘Moot Court’.

LPU School of Law is  one  of  the  premier  institutions in  the  country  imparting  legal  education to a large number of national and international students.  Within a short span of time, LPU has made its eminent place in the legal world. The energetic faculty members mentor Law students for the best legal practices and insight to win national recognitions and awards. Prior to this, LPU students have excelled in other Moot Court Competitions. LPU also has its own leading Moot Court Competition of which many editions have already been successfully completed.

Universities from Punjab are teams to beat in football at Khelo India University...

Workshop on robotics starts at UIET