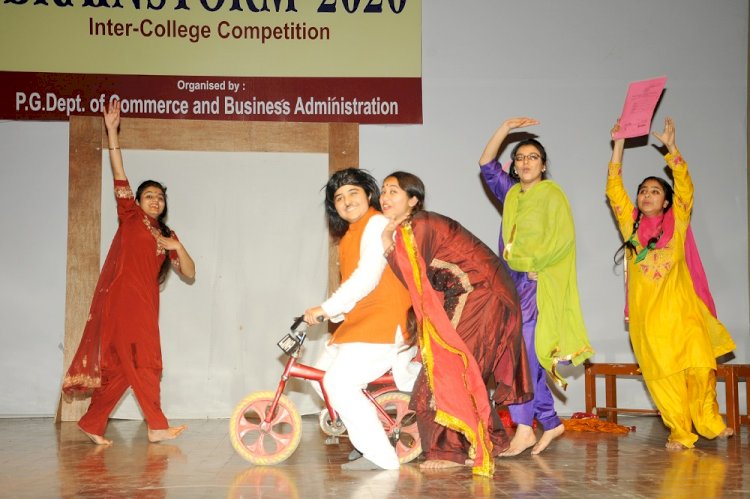 The chief Guest for the event was Principal Prof. (Dr.) Atima Sharma Dwivedi. There was an overwhelming response with about more than 200 participants from 11 colleges of Jalandhar and also from outside the city. The first event in the row was Choreography. The theme was social issues and their impact on human relations. The topic was well presented by various participants of different colleges. The second event was Business Tycoons, in which the participants had to represent and enact like any business character. The third event that followed was Vigyapan in which the participants enacted the advertisements of 1990s and tried to relive that era.  Parallel off stage items were also conducted like Pamphlet making, Collage making, Business plan and Group discussion at Devraj Hall, Conference hall and various other venues. The topic for Group Discussion was Justice Delayed is Justice Denied. In various events, Kanya Maha Vidyalaya, DAV College, Jalandhar, MLU DAV College, SSSS College, Doaba College, Hindu Kanya College and LKC bagged top positions but the overall trophy was bagged by Kanya Maha Vidyalaya and DAV College, Jalandhar. As KMV was the host college, so it was decided that the overall trophy be given to DAV College, Jalandhar for their overall outstanding performance.

Principal Prof.(Dr.) Atima Sharma Dwivedi averred that such events provide a good platform to the students to showcase their talent and creativity besides getting practical exposure. She further maintained that KMV from time to time keeps on organizing such events to hone the skills of the students. Madam Principal also lauded the efforts of PG Department of Commerce & Business Administration for taking initiative in organizing such activities.