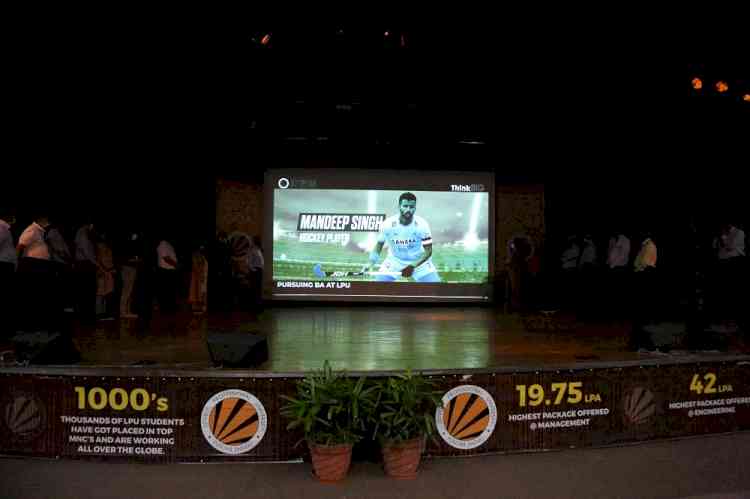 Jalandhar: Two MBA students of Lovely Professional University Harmanpreet Singh and Rupinderpal Singh made India beat New Zealand 3-2 in a Pool ‘A’ men's hockey match at the Tokyo Olympics. All the three goals were hit by LPU students Harmanpreet (2 goal) and Rupinderpal (1 goal) to brace the Indian Team for further successes, and carried India into the next round. The match was played at the Oi Hockey Stadium South Pitch of Tokyo, Japan. Now India is to fight against Australia on 25th July by keeping up the winning orgy. India is in Pool A with Australia (No 1), Argentina (7th), New Zealand (8th), Spain (9th) and hosts Japan (15th) to further proceed to quarterfinals.

LPU fraternity rejoiced the glorious win on the rhythms and tunes of a new Olympic song “Abhi To Aur Aage Jaana Hai” specifically designed, conceptualized and recorded by the University. The inspiring melody is composed and sung by the LPU students, Sadhavi and Shilpa Surroch, which encourages the audience.

Congratulating all at LPU and the seven member hockey squad from LPU to Indian team, Chancellor Mr Ashok Mittal anticipates that LPU students will enable Indian hockey team to reclaim its glorious past of exemplary winnings. He also proudly informed that this time nearly 10% of Indian Olympic contingent comprises LPU students.

In fact, Indian men’s hockey has a rich history by having won the gold eight times in the past. The last of which was won in the Moscow Olympics, 1980. However, with a current world ranking of four, the Indian team is considered to have a bright medal prospect in Tokyo. Highlighting, 7 players of the Indian Hockey team, including its Captain Manpreet Singh, are students of LPU. In addition, four others are to participate in Javelin Throw, Wrestling, Relay Race and High Jump (Paralympics).

GH10 and IH interacted with students