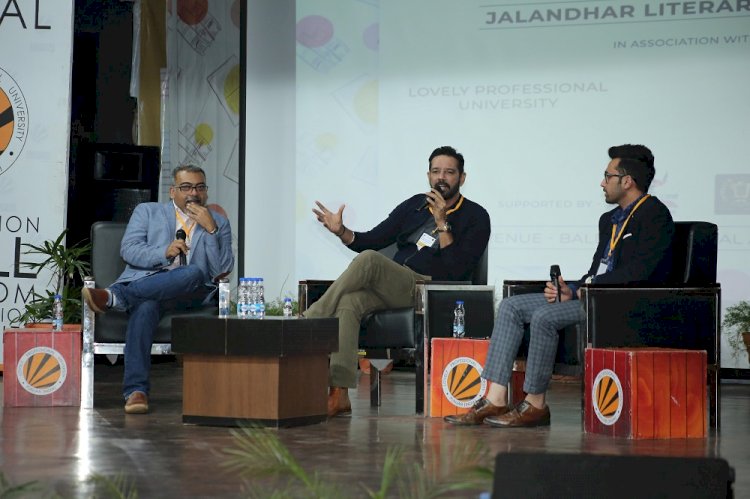 While interacting, host of 1800+ crime episodes, Actor Soni told that he tackles those crimes in the serial, which are committed by common men-women out of anger, greed, jealousy, hate, rivalry or any other personal emotion. However, crime is not any solution to such factors. He wants all to be alert about surroundings and happenings there. All should be concerned about the people they love. Talking about depression in common among younger generation, and suicides and crimes thereupon; Actor Soni suggested that this factor is the biggest killer and such victimized persons should never be left alone. They also should talk about their sufferings with their near and dear ones to avoid catastrophe. About acting, the National School of Drama graduate, Actor Anup informed that it is regularly and daily learning process and a serious profession wanting a great passion for it.

In addition to invited speakers of different fields, special two sessions were also held on Amrita Pritam- ‘Meri-Teri Amrita’ and ‘Kashmir Ki Kahani’. In fact, the fest brought India's established and emerging 30+ journalists, playwrights, film-makers, poets, painters, thinkers, performing artists on a single platform. LPU Director General Er HR Singla awarded the notable participants.
Prior to this, commencing the fest, the founder president of the organisation Nupur Sandhu informed that the word “YAYAVAR” in English means “the wanderer", and such persons move in great hopes instead of just desperation. They dive deep into the ocean of mind and get pearls in the form of mesmerizing words of various literary and art genres, be these poetic, sketches, paintings, creative writings, novels, essays, messages or more. The aim of all is to awaken and help society. She inspired students to lead unique living by carrying out their creativity.

The festival was held in association with LPU and the Rotary Club of Jalandhar. Guinness Book Record holder, Additional Dean at LPU, Dr Sorabh Lakhanpal was the first speaker at the fest, where he talked about ‘Volunteerism’. He suggested students to be society oriented through their respective services and helps to the needed ones. He illustrated that a person’s value depends upon what he contributes rather than what he obtains. Rotary Club President of Jalandhar informed about various services and projects of this international NGO. Six time gold medal winner at AIU’s cultural fest, illustrious alumna of LPU Shwetima Jamwal, who is presently popular RJ with Radio Mirchi, hosted the fest and touched the topic ‘A Reality Check of Literature Dying or Flourishing’.

Food Artist from Scotland, Kunwar Gagan, an owner of ‘39 Bakers’, talked on the topic ‘Hungry for More’. He wanted to help hungry people through left overs in a dignified manner. He aims to install large fridges outside the top hotels and restaurants to store leftover food for needed ones to utilize.  Creative Director Jasleen Kour spoke on the ‘The Art of Community Building through Events’ and motivated participating students to perform prominent roles on these lines. Director and producer of Punjabi films Harjeet Singh and creative director of Yayavar Jasleen Kaur about literature in general.

GNDU exams for final semester classes of all UG, Graduate,...

IIT Roorkee and IIPA ink MoU for collaboration in development...