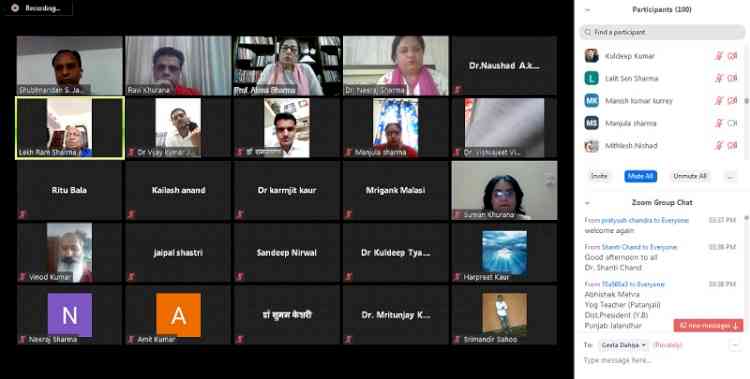 Jalandhar: Kanya Maha Vidyalaya organized a webinar on Natural Language Processing: Challenges in Indian Languages.
The webinar was organised by the Department of Sanskrit & Vedic Research Centre. The webinar was addressed by Prof. Lalit Sen Sharma & Dr Shubhnandan S Jamwal, Department of Computer Science & IT, University of Jammu. The webinar was attended by participants including teachers & students from all over India. During the webinar, Prof. Lalit stated that Natural language processing (NLP) is a subfield of linguistics, computer science, information engineering, and artificial intelligence concerned with the interactions between computers and human (natural) languages, in particular how to program computers to process and analyse large amounts of natural language data. Challenges in natural language processing frequently involve speech recognition, natural language understanding, and natural language generation.
Dr Shuhnandan explained that NLP, a part of AI technology, is key in understanding and manipulating human language. Understanding a language means knowing words, phrases, syntactic forms and concepts and also knowing how to link those concepts together in a meaningful way. This requires extensive knowledge about the languages and the ability to interpret it. NLP certainly provides useful functionalities such as part of speech tagging, phrase extraction, text categorisation, entity extraction, topic extraction and parsing. Current methods for NLP are largely driven by computational statistics. These methods don't attempt to understand the text, but instead convert the text into data, then attempt to learn from patterns in that data. It is therefore hard for machines to understand human language as it is accompanied by nuances and meanings that depend on context and non-explicit information. There are thus many added challenges for interpreting Indic languages. Indic languages do not use Latin alphabets but alphabets derived from Brahmic scripts. It's not the easiest language set for NLP to understand. Sometime there is ambiguity around certain words, where the same word in a language is pronounced differently by different people at different times and can have different meanings, depending on the context, state of mind and geographical location. NLP algorithms must figure out these differences. In this regard, Google have selected eight Indian languages for Voice search through which the users can search with the help of their voice only.
Principal Prof. (Dr.) Atima Sharma Dwivedi averred that such type of webinar on this topic was very pertinent in order to understand the operations of Natural Language Processing. Madam Principal lauded the efforts of Dr Neeraj Sharma, Head, Department of Sanskrit for organizing such an informative webinar.

Webinar on teachers’ role in new education policy at UHF