Webinar on ‘Language of History and Language in History: An Intellectual Tradition of Ancient India’ 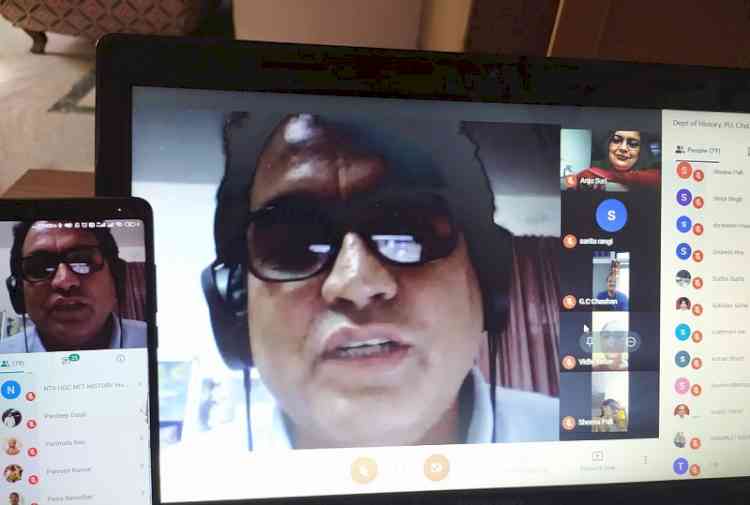 Chandigarh: The Department of History, Panjab University, Chandigarh organized a Webinar and Lecture with eminent academician, historian and linguist expert, Dr. Heeraman Tiwari on 08 July, 2020 on the theme ‘Language of History and Language in History: An Intellectual Tradition of Ancient India’.

The Chief patron of the lecture, Vice-Chancellor, Professor Raj Kumar conveyed his overwhelming appreciation of the consistent efforts of the Department of History in perpetuating academic efforts even in the times of the Corona Pandemic by inviting such eminent academicians and thinkers to address the students, research scholars and faculty members.

Professor S. K. Tomar, the Dean Students’ Welfare and Honorary Director of Human Resource Development Centre, Panjab University, Chandigarh in his welcome address highlighted how every successive step in the domain of knowledge makes him feel more humbled and eager to learn more. Dr. Anju Suri, Professor and Chairperson of the Department of History, Director of the event, apprised the almost 90 strong audience comprising faculty members from PU and other universities, students and researchers about the Speaker and the theme.

Professor Heeraman Tiwari who is a Professor in Centre for Historical Studies School of Social Sciences, JNU, New Delhi, has pursued his higher studies from Oxford University and is an established author of several books and research articles on various aspects of language, history and academia. Prof. Tiwari began by delving on the importance and vitality of using the right language and descriptive words in history so as to convey the intended meaning explicitly and with minimal chance of misinterpretation.

Prof. Tiwari expounded on how Patanjali in the ancient Sanskrit treatises has demonstrated the correct usage of language to explain and deduce meanings. The speaker highlighted the tradition of knowledge gaining and writing in ancient India which aimed to understand and contextualize the past. Language was praised because it was the only vehicle which could transmit the records of the past to the present. However, there was strict adherence to its adoption. Patanjali elaborated how one needed to understand meaning, context and channel of communication before going into the study of grammar. To Panini, anyone who is recording the past must have no self-interest to serve. Indian intellect considered knowledge a humbling experience.

Quoting examples from Sanskrit texts, he spoke about how language ought to be used, which words to use and which to avoid. The aim of language is to convey and protect culture and also contextualize knowledge. The greatest seeking starts while taking mundane subjects in the beginning and delves into the highest complexities of knowledge in the forms of questions and answers. The best example is the Bhagwat Gita in which the conversation between Arjun and Krishna is relatable even today. Arjuna, a warrior prince accepted his inability to unravel the greatest mysteries and decided to approach Lord Krishna as a layman even amidst a battle zone. The speaker stressed on the importance and role of the memory which is like a fish hook having direct connection with the present. According to him, time is relevant to look into Indic traditions of knowledge seeking and history writing which were earlier dismissed as children stories and abstract philosophies.

Professor Renu Thakur, Coordinator, Interdisciplinary Centre for Swami Vivekananda Studies and a Senior Professor in her summary comments congratulated the speaker on an excellent lecture and invited him to conduct a webinar again.

Dr. Priyatosh Sharma, the Associate Professor, Department of History and the convenor of the Webinar conducted Question and Answer Session and Dr. Ashish Kumar of the Department and the co-convenor, made preparations for the event. Dr. Jasbir Singh of the Department, delivered the vote of thanks.  The lecture was joined by experts from academic, scientists, researchers, students and faculty members from various diverse Departments and universities across India.