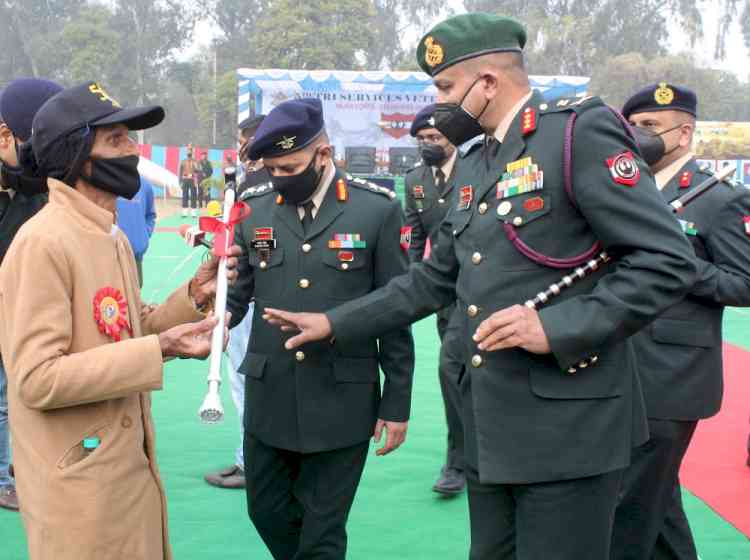 Ludhiana:     Fifth Tri-Services Veterans Day was celebrated by Vajra Corps at Central Garrison Ground, Ludhiana today to honour the services and sacrifice of the veterans of the Armed Forces. It is venerated as a day when Field Marshall KM Cariappa, the first Commander-in-chief of Indian Army post independence hung his uniform in 1953 after a glorious service to the nation. The occasion also coincides with the 50th anniversary of India's victory over Pakistan during 1971 Indo Pak war which led to liberation of Bangladesh.

The year is being celebrated as 'Swarnim Vijay Varsh' to revere the might of Indian Armed Forces.

The event witnessed the attendance of a large number of veterans from all three services and served as a platform for interaction with the serving personnel. This was the first major veteran event conducted post Corona pandemic. The Army Jazz Band played patriotic tracks to reminisce the heroism of our Armed Forces while the Pipe Band cherished their long legacy of bravery and camaraderie.

The event also provided the opportunity for unified grievance redressal wherein a number of stalls were established by various agencies associated with veterans including medical camp setup by doctors and medical specialists from the Vajra Corps. The event concluded with the felicitations of veterans by Lt Gen C Bansi Ponnappa, AVSM, VSM, GOC, 11 Corps.

Lt Gen C Bansi Ponnappa, AVSM, VSM, GOC, 11 Corps expressed gratitude to veterans for their contribution in nation building and laying the strong foundation of Indian Armed Forces. He apprised the gathering about various programmes and efforts being undertaken to reach out to them to resolve their issues. The Fifth Veterans Rally was received warmly and fondly by Veterans and has certainly strengthened the affiliation and bonding among the serving and retired personnels of the Armed Forces fraternity.