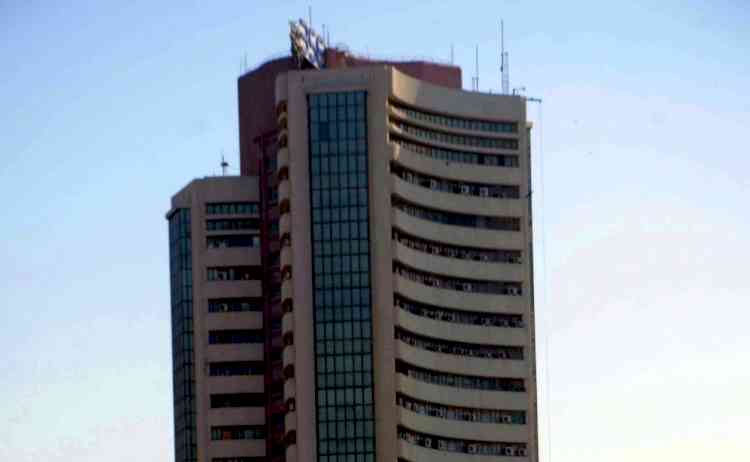 The broader markets saw BSE100, BSE200 and BSE500 lose 2.24 per cent, 2.15 per cent and 2.06 per cent respectively. BSEMIDCAP and BSESMALLCAP lost just about half of the benchmark indices at 1.13 per cent and 1.25 per cent respectively. So severe was the fall that there were no sectoral gainers and hence the one to fall the least was BSEHEALTHCARE down 0.13 per cent while the one which fell the most was BSEBANKEX down 3.15 per cent.

The Indian Rupee gained one paisa or 0.01 per cent to close at Rs 74.88 to the US Dollar. Dow Jones made a new lifetime intraday high of 35,893 points during the week and closed at its highest level of 35,819.56 points. Dow during the week gained 142.54 points or 0.40 per cent to close at 35,819.56 points. While Dow seems to be climbing a wall of concerns, there seems to be no stopping the rise as currently liquidity seems unstoppable.

In India, we are getting worried on three broad fronts. Firstly, is the correction over for the time being. Secondly, FPIs have during the current month been big sellers with net sales in excess of Rs 25,000 crore in October. Will this stop? Thirdly, liquidity which was being freely talked about seems to no longer be the talking point as FPI selling and a spate of primary market issuances would suck out any money available in the system over the next 10-12 calendar days.

Our markets have become very choppy and volatile and speaking technically, appear set for a sharp rebound in the coming week. How much, and how far and how sustainable are questions I am searching for answers. Have none at this point of time but considering that the short three-session trading before Diwali kicks in would see some rebound at the earliest. With Thursday and Friday being global markets normal days, it maybe a timid and lacklustre trading on Wednesday as people keep their positions light ahead of the long weekend.

The week saw plenty of drama on the IRCTC counter. The week began with the share coming under pressure when it was announced that there would be a split in revenue of the convenience fee charged by IRCTC between the government and IRCTC. Market was just factoring this in when another report surfaced that the government has withdrawn its proposal. Something as weird like this can only be done by the government and it has shown that. The first part of the news saw the stock touch an intraday low of Rs 605.10. The stock recovered quite sharply to close the day at Rs 845.65, a weekly loss of Rs 78.72 or 8.52 per cent.

There are three primary market issues which would open on the 1st of November and close on 3rd of November. Further two more issues have opened on Thursday and Friday and would close correspondingly on Monday and Tuesday.

The first issue is from FSN E-Commerce Ventures Limited, owners of the popular cosmetics and fashion brand Nykaa, is tapping the capital markets with its fresh issue for Rs 630 crore and an offer for sale of 4,19,72,660 equity shares in a price band of Rs 1,085 to Rs 1,125. The issue opens on Thursday the 28th of October and closes on Monday the 1st of November. The size of the issue at the top end of the price band would be Rs 5,351.92 crore. The EPS for the year ended March 2021 was Rs 1.34. The PE multiple based on this EPS is 809.70-839.55. The company has reported profits for the first time in FY21 and was a loss-making company earlier. Interestingly, the profits made in the first quarter of FY22 were a miniscule EPS Rs 0.07 per share.

The company sells beauty and personal care products under the brand Nykaa and apparel and accessories under Nykaa Fashion. Nykaa has started setting up its own exclusive brands and has been buying exclusive brands across these segments to increase its product offerings. It wants to move up the value chain by selling more luxury brands which have a higher aspirational demand and sell well in tier 2 and tier 3 towns as well. It goes without saying that they also sell in metros and tier 1 towns, but the demand from aspirational buyers is the bigger attraction.

There is a strong grey market premium which is hovering close to 60-6 per cent of the issue price. Apply for the lottery, and if successful, cash in on day one.

The second issue is from Fino Payments Bank Limited is tapping the capital markets with its fresh issue of Rs 300 crore and an offer for sale of 1,56,02,999 equity shares in a price band of Rs 560-577. The issue would garner Rs 1,200.29 crore at the top end of the band. The issue has opened on Friday the 29th of October and would close on Tuesday the 2nd of November.

The PE multiple for the company going public is at a steep 213.74 - 220.23 times based on the year end March 2021 numbers. The business model is about empowering its merchants to become mini branches using the Fino payment bank network and infrastructure. While there is no active grey market worth talking about, this would force an individual to take a call on this stock. With investors spoilt for choice between the 1st of November and 8th of November when as many as six issues would have opened and all but one closed, investors are advised to pick and choose and avoid anything that is second best.

The company has two broad verticals known as Policy Bazaar and Paisa Bazaar. As the names imply the first is in the insurance space where it provides policies for vehicles, health and life and also savings and pension products. The Paisa Bazaar vertical offers unsecured loans, credit cards, secured loans, credit score and credit advisory services.

Currently, the company is making losses but they have reduced significantly over the last three years. I believe the object of the issue spells out this point where it mentions "new opportunities to expand our customer base including our offline presence". This is a strong statement and reflects the urgent need by the company to have a better reach to the customer where it would involve reaching the customer through a call centre or in person visit to sell a product of life insurance as this is a push product and health insurance is partially of both. Competition in these two segments as of now is not much as the traditional life insurance policy was sold by a friend or a friend's friend and so on and we all initially went to just LIC until privatisation happened about 15-16 years ago.

There is a grey market price about this issue which is in the region of about 15-20 per cent of the issue price. Such rates are most unpredictable as they have the possibility of changing sharply in either direction. In case one decides to apply for the issue in which the retail portion is 10 per cent of the issue price and is likely to be oversubscribed in the region of 5 times to maybe seven times or even higher. Not getting shares even on a lottery may not be the best thing when the spate of issues happening in a bunch is already spoiling you for choice. Apply for the medium term and if you are lucky to get allotted shares take a call on what to do if you get a good listing pop.

The fourth issue is from SJS Enterprises Limited who is tapping the markets with its offer for sale of Rs 800 crore in a price band of Rs 531-542. The company had earned an EPS of Rs 15.69 for the year ended March 2021. Based on this EPS the PE multiple is 33.84-34.54 times its March 21 earnings. The bulk of the money that is Rs 710 crore is going to the selling PE Investor and about Rs 90 crore to the managing shareholder/promoter. The company is into a niche business of Indian decorative aesthetics industry, in which SJS has been growing faster than the industry. The company has products which it offers to 2-wheeler manufacturers in the form of decals and body graphics, four wheelers in the form of optical plastics, 2D and 3D dials and appliques and overlays and chromium parts, and to the white goods industry products such as IMLs/IMDs and aluminium badges. It's a company making niche products and has a great future. Investors should take a measured call as there may not be substantial listing pop.

The final issue is from Sigachi Industries Limited which is tapping the capital markets with its fresh issue for 76.95 lakh shares in a price band of Rs 161-163. The issue opens on Monday the 1st of November and closes on Wednesday the 3rd of November. The EPS for the year ended March 2021 was Rs 13.13. The PE at this EPS is 12.26-12.41 times. The company has three plants in all with one in Hyderabad and two in Gujarat. The company is a manufacturer and exporter of MCC (micro crystalline cellulose used in various industries such as pharmaceuticals, food, cosmetics and nutraceuticals amongst others. The company exports over 60 per cent of its products and the rest are sold domestically. It had revenues of Rs 196 crore and profit after tax of Rs 30.26 crore for the year ended March 2021. The issue looks interesting but the size being so small could act as a deterrent in allotment. Choose issues to subscribe judiciously.

The week ahead consists of just three days trading. Markets will be choppy and volatile. Markets are expected to stage some recovery, even if it means a dead cat bounce. One needs to buy on sharp dips and sell on strong rallies. There is no clear trend as of now. Wait for clarity post-Diwali and once these five issues are out of the way. Advise extreme caution over the next three days.

(Arun Kejriwal is the founder of Kejriwal Research and Investment Services. The views expressed are personal)

Social Media: A saviour or a predator? (Opinion)

The role that CDMO APIs play in new drug development