Says to strengthen healthcare, 1000 more health and wellness centres to be set up in state 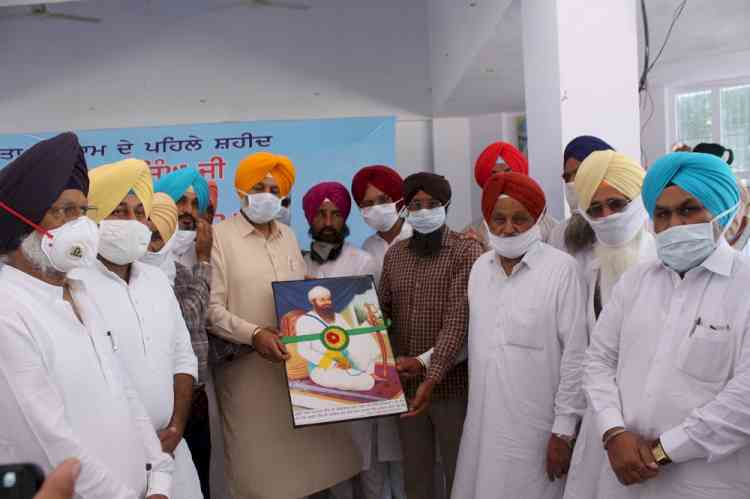 Rabbon Uchi/Malaud (Ludhiana): Punjab Health & Family Welfare Minister Mr Balbir Singh Sidhu said that to check the spread of Covid 19 pandemic, Punjab has led all the states as the number of cases in our state are much less than that in other parts of the country. He said that this was possible only because the Capt Amarinder Singh led Punjab government took timely decisions while attending the state-level function on the occasion of martyrdom day of Baba Maharaj Singh at village Rabbon Uchi, near here today.
He said that the citizens do not have to visit private hospitals or labs for their testing as more than 10,000 tests are being done daily by the government hospitals in Punjab. While replying to a question related to an Amritsar based lab giving wrong reports of patients, he informed that the license of that lab has been cancelled and in future, no such lab would be spared.
He also announced the opening of a Health & Wellness Centre in the name of Baba Maharaj Singh at village Rabbon Uchi within a month. He said that the Punjab government is committed for strengthening the healthcare services in the state. He said that out of 2900 such centres in Punjab, 1900 have already been constructed, while the remaining 1000 would also be started soon.
On this occasion, he also announced a grant of Rs 5 lakh from the Chief Minister Discretionary Fund for the development of village and for installing a statue of Baba Maharaj Singh in the village.
While paying his tributes to Baba Maharaj Singh, Mr Balbir Singh Sidhu today exhorted the people to strive for unity and integrity of the nation and follow the path shown by the first Sikh martyr of the independence struggle, Baba Maharaj Singh. He said that Baba Maharaj Singh was a great patriot who sacrificed his life for the sake of the freedom of the country.
Disclosing more, the minister said that time and again attempts have been made to portray 1857 revolt as the beginning of the freedom movement of the country but history stands testimony to the fact that Baba Maharaj Singh started the struggle for independence at the very time when he tried to free the last Sikh ruler Maharaja Dalip Singh from the clutches of the British. But in a cruel twist of fate, the British got wind of the plans made by Baba Maharaj Singh in league with his comrades and subsequently, he was imprisoned and sent to Singapore where he encountered innumerable hardships and was martyred on 5th July 1856.
The minister further elaborated that the Punjab Government is committed to the preservation of the enormously rich and glorious history as well as the cultural heritage of the state.
On the occasion, MLA (Payal) Mr Lakhvir Singh Lakha welcomed the minister and apprised him of the development-oriented demands of the constituency. Fatehgarh Sahib MP Dr Amar Singh, Samrala MLA Mr Amrik Singh Dhillon, Khanna MLA Mr Gurkirat Singh Kotli, Bassi Pathana MLA Mr Gurpreet Singh GP, former minister Mr Malkit Singh Dakha, Zila Parishad Chairman Mr Yadwinder Singh Jandiali, SSP Khanna Mr Harpreet Singh, SDM Payal Mr Mankanwal Singh Chahal, Political Secretary to the Minister Mr Harkesh Chand Sharma, besides several others were also present on the occasion.

Punjab Government decides to do away with optional extension...

Cruel joke at a time when farmers don’t know if MSP will...