And Greed Web series shooting in Uttarakhand after Lockdown 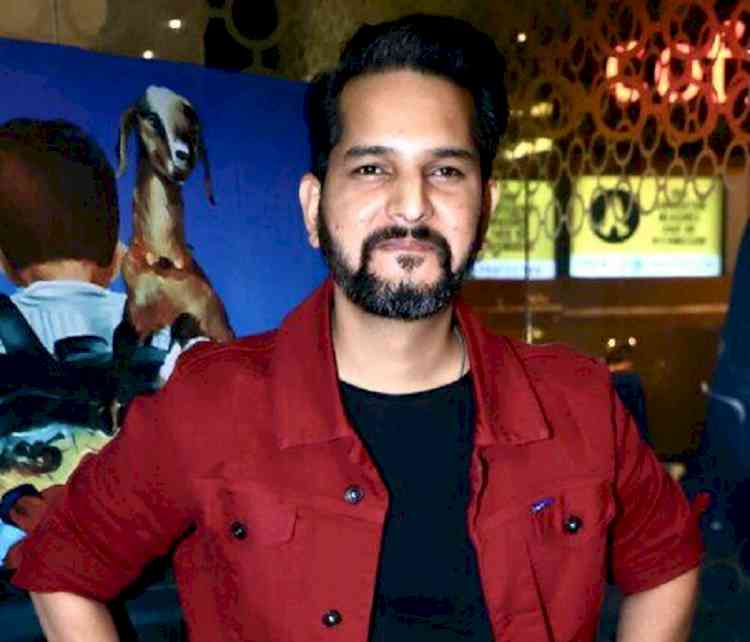 After a long journey from Kotdwar (a city in Uttarakhand) to Mumbai, Rohandeep Singh Bisht emerges as a successful film and TV producer along with distributor and marketing man of many big Hollywood, Hindi and Marathi films in India. Rohandeep born in a middle-class family and he still adores his hometown city Kotdwar. In the midst of a busy lifestyle in the film industry, Rohandeep singh seeks peace only in his paternal hometown. While sitting in his Mumbai’s office in Andheri west, Rohandeep confidently shared his life journey experiences and yet got emotional. After the success in film Marketing and Distribution Rohandeep Singh has started new producrion house name is Jumping Tomato Entertainment Pvt. Ltd. (Sister consultant company of Jumping Tomato Marketing Pvt. Ltd.) Jumping Tomato Entertainment Pvt. Ltd. will be focus on Production and Line Production. He is already started pre-production of two web Series tentative title 'Nark' and 'Greed'. The film will be shoot in Uttarakhand. The story is based true incident.

Why an Engineering degree holder came to Bollywood?

My native village is Chaur near Tadkeshwar Mahadev (Pauri Garhwal). My grandfather, Late. Shri Paan Singh Bisht was the most educated and intelligent man of my village. He loved me so much and his memories are still with me. My father Yudhvir singh Bisht and Mother Maheshwari Devi always taught me good manners and value of family and life. I was attracted to cinema since childhood. I did my High school from Maharshi Vidya Mandir Public School in Kotdwar and then intermediate in  T.C.G school. I went to Haryana for my Engineering course, where I got my degree in mechanical engineering from JCD College of Engineering,  Sirsa.


Being a writer, any aspect which people don’t know about you?
People know Rohandeep Singh Bisht as a businessman of film industry, but I also have an emotional and creative writer’s side. In 2015, my first novel, ‘Still waiting for you” received a lot of praise. Nowadays, I am working to publish my second novel ‘Majnu Mastana’, hopefully, it will publish in August 2021.

How you started your Bollywood Dream?

I was keen in writing , Marketing , Distribution and Production & Film programming & Exhibition   but before that I wanted to establish myself. My father was not very happy with my decision to go into film industry, and he never boosted me for it. After finishing my mechanical engineering studies, I went to join  Endurance company (Bajaj Auto ) in Pune. Machines were never my first love, so I quit my job of that big company and went straight to Mumbai, where I started a film distribution & exhibition business.

This was the period of my life when I had tasted a few sweet and many sour experiences. Some films did a poor business and some got caught in the old traditional film distribution ways and hurt the business with great loss which taught me many business lessons.

Mumbai: one and only place fulfill your Bollywood dreams

To fulfill the Bollywood dreams, one must have to come to Mumbai. But this was not easy for me. Kotdwar to Pune  via  Mumbai was not a successful journey for me.
This time, I added my film distribution experience with the professional marketing rules. Many Hollywood and Bollywood films have been distributed from my ““Jumping Tomato Marketing Pvt ltd” distribution company, like, Khaap, Bamboo, Listen Amaya, Rajdhani Express, Shortcut Romeo ,What the fish, Toilet: Ek prem katha, Death Wish, Godzilla 2, Notebook, Troy, Jumanji, Final Exit, and many more. Content of Marathi cinema really inspired me and then I produced and distributed many Marathi projects like, WhatsApp love , Dome , Miss u Miss, Berij Vajabaki,  Miss U  Miss, Peter and Oh my Ghost.

How you see a film  production?

As a co-producer, I have made films, Shortcut Romeo. I did the producer , distribution and presented my film, “Thodi Thodi-si Manmaniyan” which was made tax free by the government of Uttarakhand. I also co-produced a television show “Hitler didi”. That was a good experience. This year, I am working tirelessly on the production and distribution. Keeping in today’s generation and demand in mind, my team is writing contents for web-series along with films and TV shows. Audience loves good content and then marketing and distribution are also important parts. After the successful release of two big Marathi films, “Peter” and “Oh my Ghost”, we are soon going to announce much better films.

My dream project: 100 Days in Heaven

Talking about the new show and its planning, Rohandeep says, ‘This show ‘100 days in heaven’ is a huge TV reality show going to be shot in Uttarakhand and we are going to feature mountaineers from all around the world. ‘100 days in heaven’ is a dream project of Avdhesh Bhatt. This year we are also going to make two web series for OTT. Stories have been approved; we have already started casting for the show. For these shows, we have signed an agreement with ZEE network . The concept idea of this show was given by my business partner and mountaineer, Avdhesh Bhatt.

Ministry of Tribal Affairs collaborates with Microsoft to skill educators and students...