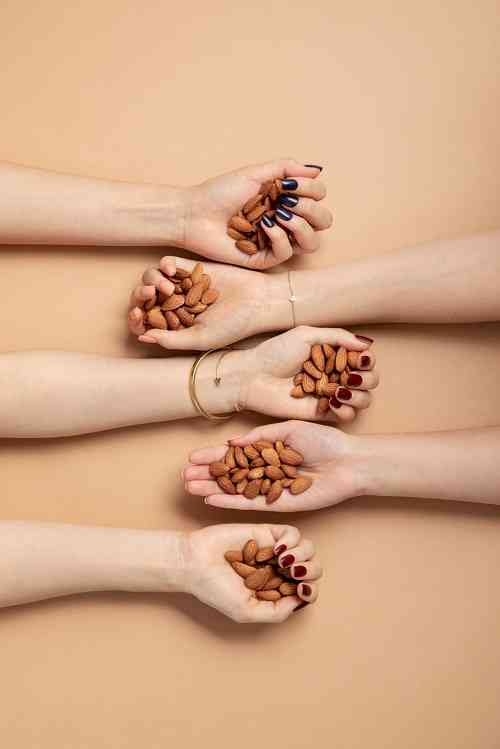 New research suggests that there may be more than one reason to add almonds to your daily skin care routine. A new study by researchers at the University of California, Davis found that eating almonds daily in place of typical calorie-matched snacks improved measures of both wrinkle severity and skin pigmentation in postmenopausal women. The study was funded by the Almond Board of California and confirms and expands upon findings in a 2019 study.

In this 6-month randomized controlled trial, 49 healthy postmenopausal women with Fitzpatrick skin type 1 or 2 (characterized by increased tendency to burn with sun exposure) completed the study. Participants were randomly assigned to one of two groups: in the intervention group, women ate almonds as a snack, which accounted for 20% of their total daily calorie intake, or 340 calories per day on average (about 60 gms).  The control group ate a calorie-matched snack that also accounted for 20% of calories: a fig bar, granola bar or pretzels. Aside from these snacks, study participants ate their regular diets and did not eat any nuts or nut-containing products.

Skin assessments were made at the start of the study, and again at 8 weeks, 16 weeks and 24 weeks. At each of these visits, facial wrinkles and facial pigment intensity were assessed using high-resolution facial imaging and validated 3-D facial modeling and measurement. Skin hydration, transepidermal water loss (TEWL) and sebum excretion were also assessed.
Researchers found a statistically significant reduction in wrinkle severity in the group consuming almonds: at 16 weeks, there was a reduction of 15% and at 24 weeks, a reduction of 16%.

There was also a statistically significant decrease in overall facial pigment intensity (unevenness of skin tone) in the almond group, There was a 20% reduction by week 16 that remained so at week 24. Further, body weight remained constant for both the almond group and the control group from baseline to 24 weeks.

“Daily consumption of almonds may be an effective means of improving the appearance of facial wrinkles and skin tone (indicated by decreased pigment intensity) among postmenopausal women with Fitzpatrick skin types I and II. Consumers may describe this reduced pigmentation effect as having a more even skin tone,” according to Dr. Raja Sivamani, dermatologist and lead researcher of this study.

Transepidermal water loss, skin hydration and sebum excretion were measured on the forehead and cheeks in both groups during the study:
•    There were no changes in transepidermal water loss at any time point among the almond and control groups.
•    At the end of the study, there were increases in skin hydration among both groups.
•    Looking at sebum excretion rate,both groups showed an increase on the cheeks, but only those in the control group showed an increase in the forehead area.

“Our findings emphasize the need to look at almonds as a whole food with multiple nutrient components including alpha-tocopherol (vitamin E) and good unsaturated fats, rather than oversimplifying potential benefits due to one nutrient alone. Almonds are high in alpha-tocopherol which has antioxidant functions, and may be partially responsible for the effects that we see in both wrinkles and skin tone in postmenopausal women,” says Dr. Sivamani.

Commenting on the findings of the study, Dr. Geetika Mittal Gupta, Dermatologist and Cosmetologist, “It’s great to see that the study demonstrates not only a significant improvement of facial wrinkles, but also that of skin tone with daily almond consumption. These results are especially relevant in India, where high exposure to sun and other environmental factors lead to uneven skin tone. Almonds are known to be a rich source of antioxidant vitamin E and deliver essential fatty acids and polyphenols, which make them a great addition to one’s daily diet for improved skin health. This study further validates the belief that almonds promote skin health and I urge women to include them into their daily diet, to achieve healthier skin.”

Limitations of the study include its duration of 24 weeks; results do not provide insight into the potential effects of longer-termalmond intake. Additionally, the study participants were postmenopausal women with Fitzpatrick skin types I and II (characterized by increased tendency to burn with sun exposure). More research is warranted to investigate the impact of almond consumption in other populations. And, although the snacks in both groups were calorie-matched, they were not macronutrient-matched.

In agreement with the results of the study, Ritika Samaddar, the Regional Head-Dietetics, Max Healthcare – Delhi, said, “While other health benefits of almonds have been demonstrated by several other clinical studies in the past, this new research presents exciting findings in the area of skin health – a subject near and dear to every woman’s heart. The results show how daily consumption of almonds aids skin health by reducing skin pigmentation and facial wrinkles. It’s a known fact that diet plays a crucial role in promoting skin health, and this study provides further evidence in support of that fact.”

Sheela Krishnaswamy, Nutrition and Wellness Consultant, said, “In this day and age, where pollution and toxins are taking over our well-being, we must take extra care of our skin. Believing in the popular notion of “health from the inside out” stands true and the study is testament to this. Not only does the new study provide first clinical evidence that almonds may help promote more even skin tone by reducing facial pigment intensity, but also, supports previous evidence that eating almonds may help improve wrinkle severity. Keeping in mind the findings of the study, I would recommend women, especially those in the postmenopausal age, to begin snacking on a handful of almonds every day for better skin health in the long run.”