National seminar on Make in India making it work concludes 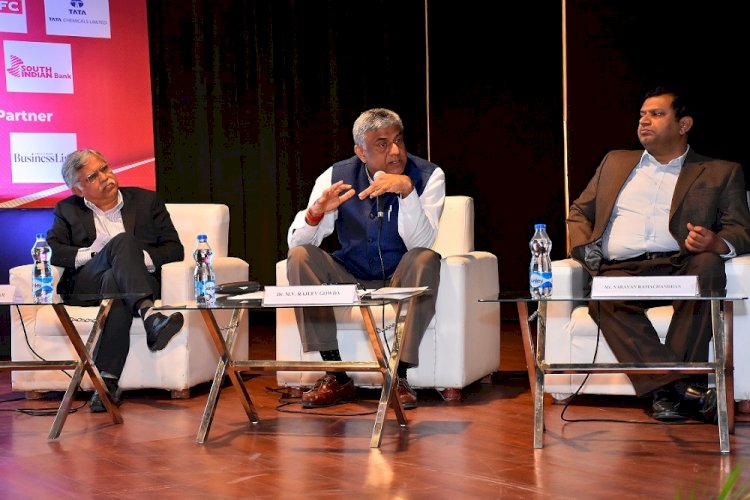 Mumbai: The two-day National Seminar hosted by XIME on ‘Make in India: Making It Work’ ended with amazing power packed sessions highlighting ways in which not only the manufacturing industry but all industries including SMEs and start-ups can contribute towards making the national campaign a success. The seminar, conducted by one of India’s leading Business Schools, emphasized on the various policies that can act as an effective instrument to enhance GDP and generate employment alongside intellectual thoughts and opinions from industry leaders.

Attended by over 100 delegates from different industries across Karnataka to understand the strategies, policies, initiatives and actions, the concluding day of National Seminar at XIME witnessed four interesting fire-chat sessions titled:

After five years of launching Make in India, it is now time to take a step towards initiating Make in India 2.0. The dignitaries at the Seminar emphasized that it will not be possible to achieve, if the country continues to stay swadesi in its educational approach. Making a transition from being swadesi to global in their industrial and occupational approach will help manufacturers and other industry members witness a gradual positive change.  The conference also focused on the importance to stay aware of the changes happening around and develop a healthy organizational culture to ensure healthy economic growth.

During his speech, Prof. C. P. Chandrashekhar, Former Professor of Economics, JNU commented, “In the post-Independence period, there has not been a year when the share of GDP has seen an upward trajectory as compared to other developed country’s manufacturing share of GDP. It is as high as 25%-30% in the developed countries, whereas in India, it is only 15-17%, and this is a long-term failure for India. Secondly, it is important to note that the principle drivers should have a spin off effect which can help in ensuring a continuous growth.”

Mr. Rajeev Gowda, MP, Rajya Sabha primarily focused on sharing the stark distinction between what Make in India aspired to do and what the actual reality is. He remarked, “Make in India aimed at creating 100 million jobs since its inception back in 2014 but has failed to do so till date. Instead, the textile industry lost 30 million jobs. The manufacturing industry witnessed a slowdown and is already perceived to be lost in the desert. More emphasis must be put down on the aspect that our thinking must not be limited to growth of only large corporates but also for MSMEs in case of manufacturing industries, as they have always been looked down.”

Mr. Rakesh Sasibhushan, CMD, Antrix shared, “The space industry in India is at the cusp of major break-through. As per Morgan Stanley report, Global Space Economy will be $ 1.1 trillion by 2040 and India is well positioned to garner significant market share of global space industry.”

Addressing the audience on why India needs a ‘Can Do Attitude’, Mr. Vikram Kirloskar, President, CII said, “I think, the big change that can drive Make in India, is the right attitude towards developing a culture of manufacturing within the country with the skillset we possess.  We need to focus on developing on our own and not depend on technologies and services provided by other countries.”

While sharing his concluding speech on the National Seminar themed Make in India, Prof J. Philip Chairman, XIME & Former Director, IIM Bangalore said, “In the last 5 years, Make in India has been the most ambitious movement by the Govt. of India in the recent history to boost industrial advancement. This resulted in an increase in the FDI, especially in 2016-17, when we overall crossed USD 61 million. I strongly support the Government’s approach to Make in India. Although it is a bold initiative, there is a slowdown within the industry currently which is prompting the industry members to be in a wait and watch mode.”

The two-day seminar brought out some brilliant suggestions and prescriptions from the speakers in the past two days. Through this initiative, XIME with its legacy of 25+ years, successfully focused on discussing and debating the policies, strategies and steps that should be taken in future with regards to not only manufacturing but also sectors such as agriculture, information technology and software, pharmaceutical, skill development, design-based technology to achieve overall organizational growth.

FLO’s first of its kind virtual change of guard held