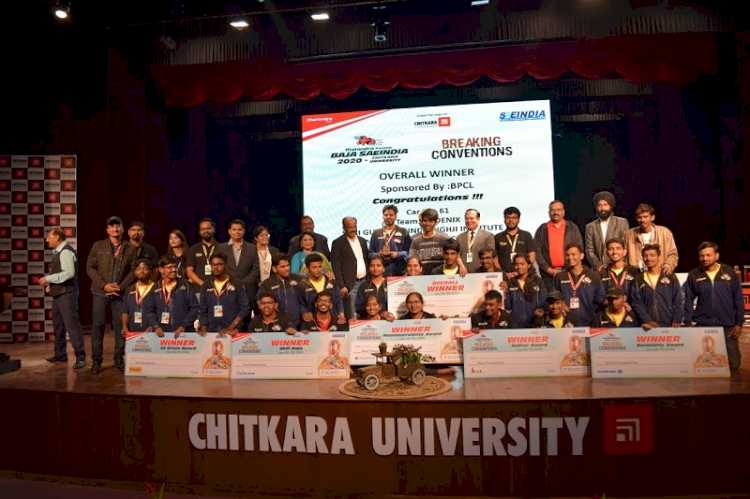 Chandigarh: Chitkara University grounds witnessed the much-awaited leg 2 of the 13th edition of the Mahindra BAJA SAEINDIA 2020, which finally came to a successful conclusion today, leaving behind many exhilarating moments. A total of 31 out of 77 BAJA teams completed the endurance round braving the mud-spattered track.

Mahindra BAJA SAEINDIA 2020 received an overwhelming response with representation from all zones- Western, Northern, Eastern and Southern zones in India.

Various other awards to the teams for static events were also presented. The Pride of Punjab (Punjab & Chandigarh) Award is grabbed by Sant Longowal Institute of Engineering and Technology, Punjab. Sri Guru Gobind Singhji Institute of Engineering, Maharashtra also won first prize in Durability.
Total 282 teams had registered in the 13th year of BAJA SAEINDIA series, out of which 253 (120- mBAJA and 53 eBAJA for Pithampur and 80 for Chitkara University) teams qualified for the finale. However, only 37 teams for BAJA made it to the Endurance round. This year was remarkable with more than 5000 students and faculty from different parts of the country celebrating the BAJA SAEINDIA 2020 theme ‘Breaking Conventions.’

While speaking on the occasion, Professor Dileep Malkhede said, “BAJA is a transformative process which revolutionised the technical education in the country. Students got opportunity to explore their potential through demonstration of their engineering skills. BAJA is a mission and could become possible through efforts of passionate people. This is a process of making people successful. It has also generated competent manpower for automotive industry. AICTE is happy to financially sponsor Indian teams for participating in International BAJA. In past 2 years, every team that we sponsored has demonstrated the ability of Indian mind to conquer the world.”

Sharing her experiences as the host institute, Dr. Mrs. Madhu Chitkara, Vice Chancellor, Chitkara University, said, “It has been an amazing experience for having the young Mech Masters ‘Boys and Girls teams’ on the campus from diverse yet one India for four days. And it was entirely our privilege to be a mini India with their vibrant presence.”

Earlier in the morning the Four-hour endurance race was flagged off by Professor Dileep Malkhede, Professor Dr. Sagar Maji and other dignitaries present at the Endurance event. The 2 km long race track consisting of muddy pits, cliffs and slopes of 15-20 feets of height threw tougher challenges for the students and pushing them to their limits.

The four-day event started with basic Static Evaluation round which comprised of design evaluation, cost evaluation and marketing presentation. In the final round, the teams showcased their prototype of a rugged single seat, off-road recreational four-wheel vehicle and were evaluated on various parameters, including engineering design, CAE, cost and technology innovation.
The objective of the competition was to simulate real-world engineering design projects and their related challenges. Each team’s goal was to create a safe, easily transported, easily maintained and fun to drive prototype without any direct involvement from professional fabricators.

However, the teams were free to design their transmissions with the only restriction being the speed limit to 60 kmph. The Dynamic Evaluation Round tested the vehicles for acceleration, sledge pull, manoeuvrability and Suspension & Traction. Durability Evaluation Round saw the vehicles undergo endurance tests of four hours of BAJA. The Endurance Event assessed each vehicle’s ability to operate continuously and at a speed over rough terrain containing obstacles in any weather conditions.