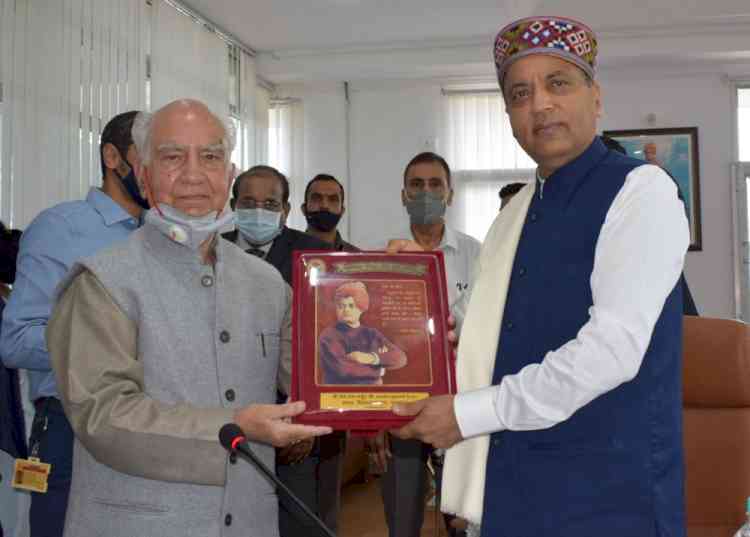 Dharamsala, September 13, 2021: Chief Minister and Chief Patron, Vivekanand Medical Research Trust (VMRT)  Jai Ram Thakur while expressing happiness over the services offered by Vivekanand Medical Research Trust (VMRT) to the public, extolled the efforts of Shanta Kumar, former Chief Minister and other trustees. He said ,”Shanta Kumar cherished a dream decades back to serve the people of the area, proving that nothing is impossible in this world if objectives are noble and decided with a pious heart. The Yog, Naturopathy, Panchkarma and Physiotherapy were started under a cluster treatment system at the Kayakalp in 2005. But, it took a long way to start Vivekanand Hospital facing a lot of hurdles and difficulties and it could be started in the year 2012 only after putting in untiring efforts”

He was speaking at a meeting of Vivekanand Medical Research Trust, Palampur near here, today.

“I am pleased to know that Kayakalp is the first Aayush hospital in Himachal Pradesh recommended by the National Accreditation Board for Hospitals and Health Care Providers (NABH). It has earned a good name in and outside the nation in the treatment of lifestyle related diseases. A large number of lives have been saved in emergency as people are getting upgraded health services at their doorsteps. The trust has been successful in achieving its foundation goals,” he added.

The Chief Minister said that he had come to learn about a new project oath taken by Shanta Kumar, the foundation of which had been laid. The Vayo Vrudh Seva Sahyog Kendra under the name ‘Vishranti’ is a new leaf. This centre would prove a boon to the aged under medical emergency and geriatric care system. He wished for an early functioning of this Centre. The State Government is committed to the smooth functioning of this trust. All essential steps have been taken for the arrangement of MRI and all possible help will be extended as and when needed.

Jai Ram Thakur hoped that the roadmap prepared by VMRT for setting up of cath lab within two months, Nursing College in the name of  Martyr Saurabh Kalia and Mount Kailash Block as desired by the Dalai Lama would usher in a new phase in the medical and health activities at the campus.

Health Minister Dr. Rajiv Saizal speaking on the occasion said that the concept of integrated health facilities initiated by Prime Minister Narendra Modi was being realized at VMRT. He congratulated Chief Minister Jai Ram Thakur for achieving cent percent vaccination of the first dose of Corona vaccine for the eligible population in Himachal Pradesh.

Former Chief Minister and Chairman, VMRT Shanta Kumar welcomed Jai Ram Thakur and others present in the meeting. Remembering the founding history of Vivekanand Medical Research Trust, he termed the ongoing meeting historical. He enumerated the difficulties faced during the foundation of this health institute. He said that the Vishranti, Vayovridh Seva Sahyog Kendra would house all basic and upgraded essential and health facilities.

Founder Jai Prakash Sewa Sansthan JP Gaur shared his journey as an entrepreneur in Himachal Pradesh. He said the dream of Shanta Kumar had been realized.

Manoj Gaur, Managing Trustee VMRT while conducting the meeting welcomed the Chief Minister and others on behalf of the trust. He said that the cath lab would start within the stipulated period at VMRT.

Webinar on Career Opportunities in Defence Technology held at Amity

Mamata will win by huge margin in Bhabanipur, says BJP...

I am committed to serving humanity and working to protect...

Won't ask a thing if Cong opens hukka bars in name of Nehru:...