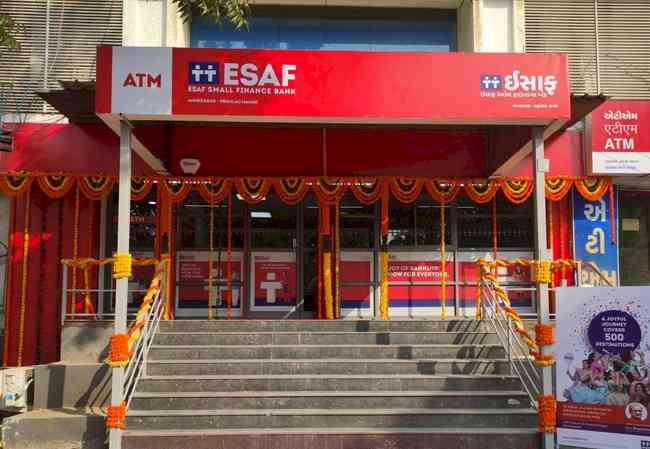 Ahmedabad: In a major milestone in its three years' journey, the Kerala based lender ESAF Small Finance Bank has opened 500th branch on Thursday in Ahmedabad. The new branch was inaugurated at Prahlad Nagar in the city by Bhupendrashinh Chudasama, Minister of Education, Gujarat in the presence of K Paul Thomas, MD & CEO ESAF Small Finance Bank and P.R Ravi Mohan, Chairman, ESAF Small Finance Bank in a virtual event. The ATM was launched by Asit Vora, Chairman of Gujarat Subordinate Services Selection Board. This is the fifth branch in Gurajat and third in the city. ESAF Bank has branches in Surat and Vadodara besides Ahmedabad. The event was attended by senior officials of ESAF and staffers across the country.

"We believe this expansion is a manifestation of our vision to be India's leading social bank that offers equal opportunity for the whole society through universal access. The bank could expand its footprints further even during the pandemic with the support of robust growth and customers' confidence invested in us," the bank's Managing Director and CEO, K Paul Thomas said at the launch of the new branch.

The bank caters to more than 40 lakh customers through its banking outlets across 19 states and two union territories as of September 30, 2020 The bank serves underbanked population across the country through various products such as fixed and recurring deposit schemes with attractive interest rates, gold loans, and affordable loans for small and micro entrepreneurs and individuals.

Invest with caution discussed at webinar by UIAMS

Amazon to invest US$ 1 billion to help digitize MSMEs and...

IceWarp discusses on significance of art of coordination...