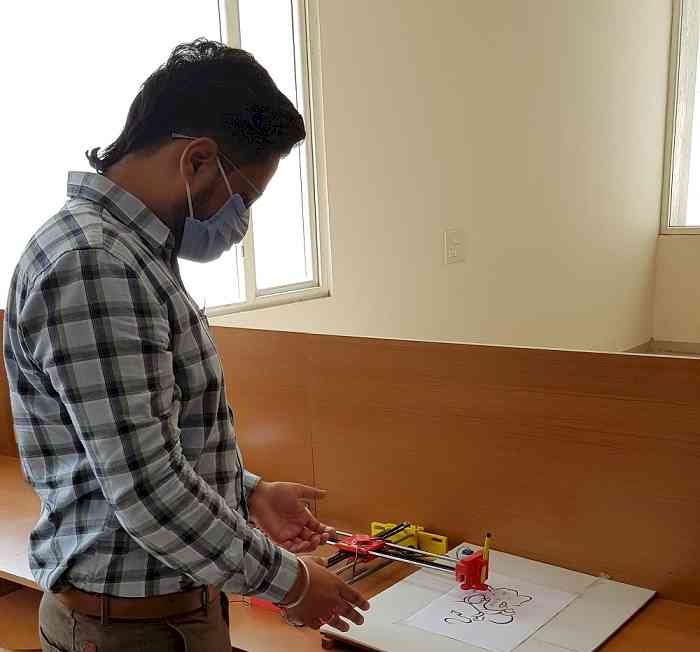 Dr Harmeet Singh from CTU under whose guidance this robot is developed,

Ludhiana: CT University under the start-up ‘Robonova’ has developed a drawing robot. The project is made by Satyam Gupta, student of BCA 3rd Semester under the guidance of Dr Harmeet Singh. The robot was just finalised in two days and most of the parts are developed in the Robotics and Automation Lab of CTU itself using a 3D printer.
Gupta, the student who made this robot said, “The main components used in this robot are Ardunio Uno, CNC shield, and Stepper motors. The stepper motors used in this robot make the robot to work very precisely.  The main applications of this robot are that it can be used as a CNC machine, Laser cutting machine, and Drawing machine. The mechanism of this robot is the same as a 3D printer, so if the tool for this robot is pen it can draw, and if drill it can be a CNC machine. So it’s a kind of multiple purpose machine.”
Dr Harmeet Singh, Project Head of Robonova start-up added that this robot is very portable and can be developed in just two days. The prize is also pocket-friendly. Moreover, it can mainly be used by Architects and Engineers for complex Drawings. The Drawing or working area of this robot can be designed according to the requirement of the user. It works the same as a 3D printer and it accepts the G-Code file. The machine consists of 3 Axis motions which is handling the part of the drawing section. The arms are made by 3D printed parts and connected through steel rods for the movement of each axis. For the motion, we used Nema stepper motors and long belts which are connected to different pulleys for their actions. The machine can work 24hrs in a day and it doesn’t take much more time rather than a human effort to complete any task.”
Dr. Harsh Sadawarti, Vice Chancellor, CTU said, “The start-up Robonova was launched to reach out to all the students who are keen in research and development. I am glad that students are bringing out their potential in this field and this drawing machine is an apt example for the same. Upcoming, is the time of Research along with Education. We all must encourage the students to path their ways leading to such things. Congratulations to the team for this successful project.”