The Copyright Amendment Bill has been passed, but government has to do a lot: Vikas Kapoor

Besides writing the scripts he also produced many TV serials 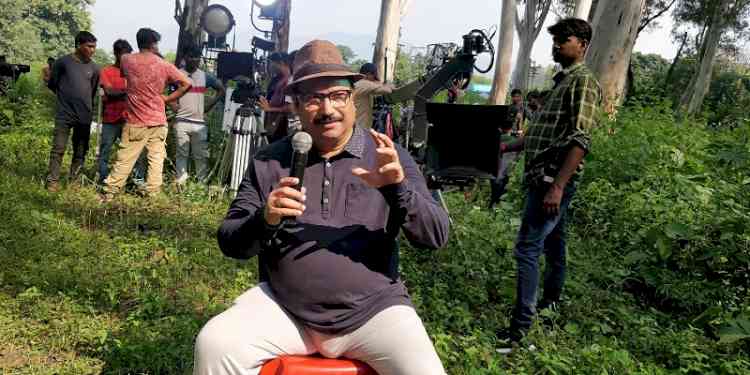 Vikas Kapoor came from Kanpur in Uttar Pradesh to Mumbai on invitation of Nitish Bhardwaj and began writing script for TV serial “Geeta Rahasya”. After that he wrote scripts for several TV serials such as “Om Namah Shivay”, “Shri Ganesh”, “Shobha Somnath Ki”, “Jap Tap Vrat”, “Om Namah Narayan”, “Manme Hai Vishwas”, “Hamari Devrani”, “Jai Santoshi Ma”, “Srimad Bhagwat Mahapuran” and feature films “Shirdi Ke Saibaba” and “Sri Chaitanya Mahaprabhu”. That is the reason he is known in the film industry as “god’s writer”.
Besides writing the scripts he also produced many TV serials including “Shobha Somnath Ki”, “Achanak Us Roj”, “Ravi Aur Magic Mobile” and “Saibaba”. The books like “Sai Ki Atmkatha”, “Kundlini Jagran” and “Sat Chakronka Rahasya” written by him have been published by reputed publishers across the county. Now a days he is directing a Hindi feature film “Chal Jeet Le Ye Jehan”.
A few days back the TV serial “Sri Ganesh” written by him was re-telecast on “Star Plus” after nearly 20 years and similarly “Colors” TV channel began televising the serial “Om Namah Shivay” after 23 years. These serials have been receiving good viewers’ response.

The excerpts from interview with Vikas Kapoor:

Q. The TV serial “Om Namah Shivay” is being re televised after 23 years. How do you feel and what you have to say?

A. I am a devotee of Lord Mahadev (Shiva) and I get filled with emotions with darshan of Mahadev. But in fact I had done scripting for this serial after 135 th episode. Before that the scripting was done by Dr Rahi Masoom Raza and after his demise Dr. Achala Nagar and late Darshan Lad. After that Producer Dheeraj Kumar and director Chandrakant Gaud encouraged me to bring in novelty and new ideas in the story. Thereafter I scripted the serial till end.

Q. Do you recall any memorable event during this period?

A. “Om Namah Shivay” was the most debated show and after every episode the viewers used to write hundreds of letters. The responsibility of reading and replying to those letters was given to me by my producer. One day a viewer from Uttar Pradesh sent a letter narrating how devotedly his father used to was watch “Om Namah Shivay”. He was curious to watch the first meeting between Mahadev and Ravan in the next episode. But he passed away before the episode was telecast. Thinking that his last desire was to watch that episode, we kept his body in front of the TV set, when that episode was being telecast and performed his last rites after 73 hours, his son wrote in the letter. After reading that letter, the entire unit was in tears. We stopped shooting, observed two minutes silence as mark of respect to that “Shiv Bhakt”. I can never forget this incident.

Q. TV serial “Shree Ganesh” is being re-telecast after 20 years. Would you like to say anything? Do you recall any event?

A. It was the first TV serial based on the mythological legend behind Lord Ganesh. Before the shooting, nearly 20 episodes were written and the date of the shooting was also fixed. That time one incident indicating the glory of lord Ganesh occurred. Since long I was doing recitation of “Ramayan” on every Tuesday. In “Bal Kand” I had read that Shiva and Parvati worshipped Lord Ganesh after seeking permission of sages during their wedding. After reading that I was startled and felt that Lord Ganesh was giving some indications. I was puzzled with a question, how Ganesh could be worshipped when he was not born ? As such I told producer Dheeraj Kumar that our serial will not begin with the scene of Lord Ganesh;s birth.
In this matter Dheerajaji must be praised as much as one could. He trusted the entire team. I can never forget the experience of working with him. Especially I remember his wife Zubi Kochar even today. She was always doing something new and was encouraging others. On my advice Dheerajji stopped the shooting and we began fresh research based on “Ramayan”. After a lot of search, my female colleague from Tamil Nadu, gave me some compendiums containing detailed information about Lord Ganesh, which was not available in the compendiums available in North India.
Then we wrote the episodes afresh, where we presented the real story of Lord Ganesh. It was just like Lord Vishnu appearing as incarnation of Ram, in mother Kaushalya’s lap and sometimes as Krishna in the lap of Devki. Like Lord Ganesh too appeared in mother Gauri’s lap. Initially viewers in North India were unable to understand Lord Ganesh’s majesty. But after a few episodes, maximum viewers liked it and serial remained on the top consecutively. The entire team, especially the episode director Anwar Khan deserve compliments for this.

Q. Till now you have scripted mostly religious TV serials. What is the reason?

A. After I came to Mumbai, I began writing for the religious TV serial “Geeta Rahasya”. Then, in keeping with the film industry’s tradition, I was stamped as the writer of religious serials. As a result I got the work mainly related to the religious serials. But I consider myself fortunate because the almighty gave me opportunity to write about him and I got a virtue (Punya), which one gets after a lot of saintly work.

Q. Do the writers get a royalty like it is given to the lyricists and music directors?

Gippy Grewal out now with rare sad, romantic song Me &...

My childhood memories of summers are incomplete without...