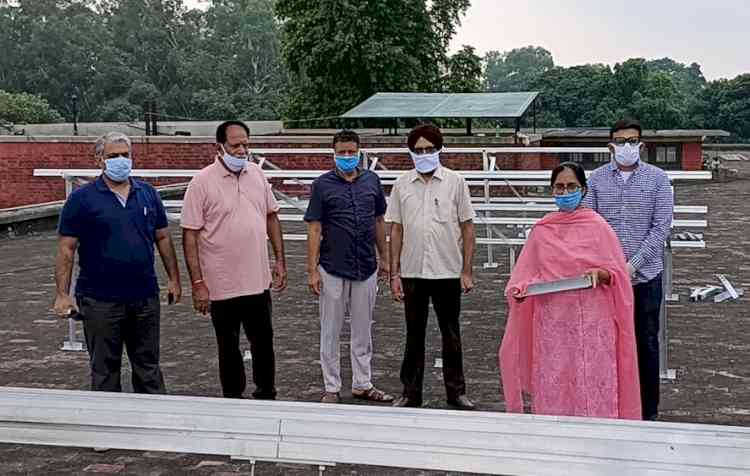 Ludhiana: In a bid to save our environment and generate green energy, the work to install 128 KW solar net metering system has started at Government College for Girls campus, here. Punjab Food, Civil Supplies & Consumer Affairs Minister Mr Bharat Bhushan Ashu had earlier announced that solar panels would be installed in 25 government schools and two government colleges under the Ludhiana Smart City project.

He had said that on the completion of this project, these schools and colleges would be fully powered using solar energy, that would not only lead to saving money, but would also contribute in saving our environment by producing green energy.
Accompanied by MC Councillor Mrs Mamta Ashu, Mayor Mr Balkar Singh Sandhu today visited the GCG, here, and inspected the start of work.

Mayor Mr Sandhu informed that the work on installing 128 KW solar net metering system at GCG have started today and would be completed shortly. He said that besides this, the work has already been completed at Government Schools at Barewal, Haibowal, Jawahar Nagar and PAU. He further informed that these solar panels would have a life of 25 years and the installation cost would be recovered in 5 years time.

PEDA District Manager Mr Anupam Nanda informed that the setup of solar net metering has been installed by Punjab Energy Development Agency (PEDA) and they also imparted the technical know how about it.

All shops to remain closed on Sundays: District Magistrate