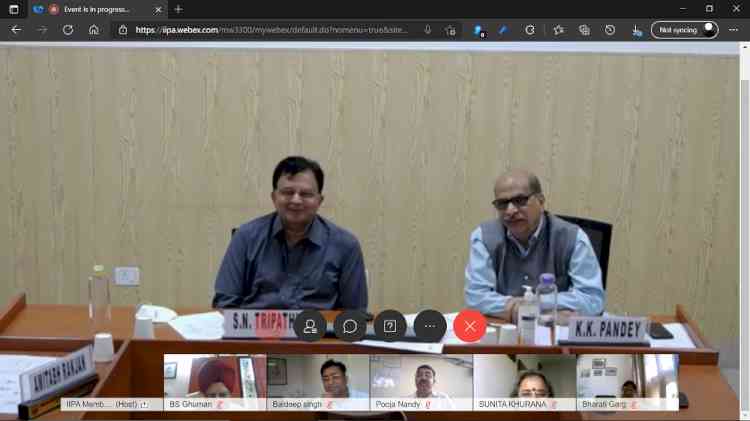 Chandigarh, September 16, 2021: Under its webinar series on Flagship Schemes of Government of India, The Indian Institute of Public Administration (IIPA), organized a Webinar on “Pradhan Mantri Awas Yojana (Urban)”. This webinar was organized in association with IIPA’s Punjab & Chandigarh Regional and Department of Public Administration, Panjab University.
Shri Surendra Nath Tripathi, IAS (Retd), Director General of IIPA made the opening remark on IIPA’s webinar series and the PMAY (Urban) scheme of Government of India. Linking housing with the idea of identity, he highlighted the importance of affordable housing and the role PMAY (U) is playing in it. He also talked about the status and nature of efforts in Punjab towards provision of affordable housing.
The opening remarks were followed by introduction of the theme of the Webinar by Prof. B.S. Ghuman, Honorary Secretary, IIPA’s Punjab & Chandigarh Regional Branch. He welcomed all the Key Speakers and guests on behalf of the IIPA’s Punjab and Chandigarh Regional branch. Prof. Ghuman placed housing as one of the three basic necessities alongside food and clothing. He contextualized issue of urban housing within the broader trend of increasing concentration of population in urban areas, making cities the future engines of growth.
The first presentation was made by the Key Speaker Dr. Akshaya Kumar Sen, Joint General Manager (Economics) and Fellow Human Settlement Management Institute, HUDCO, New Delhi. Dr. Sen gave a detailed introduction to the PMAY (U) scheme. He underscored the importance of PMAY (U) in terms of its enormity with respect to scale, space and performance. Dr. Sen also mentioned the UN’s Habitat III New Urban Agenda that focuses on integrating housing in the broader National Urban Policies and the way PMAY (U) is aligning with this goal. He further analyzed the skewed flow of finances with respect to affordable housing and the efforts made under PMAY (U) while integrating with other schemes such as AMRUT, SMART Cities and Swachh Bharat Abhiyan to mobilize resources. The second Key Speaker was Dr Sunita Handa Khurana, Former Director, Institute of Secretariat Training & Management, Government of India. Dr Khurana started by situating the issue of Housing within the framework of Fundamental Rights as it has been linked to the Right to Life by the Honorable Supreme Court of India. Dr. Khurana also delve into the concept of distinction between shelter, housing and adequate and affordable housing and the way PMAY (U) is taking up the challenge of urban housing shortage. The consistent increase in decadal growth of urbanization has made the earlier targets of housing for all remains unfulfilled. The third Key Speaker Prof K.K. Pandey Professor & Coordinator, Centre for Urban Studies at IIPA highlighted the role and capacity building of Urban local bodies in implementing PMAY (U). The fourth Key Speaker, Shri Baldeep Singh, Technical Director Punjab State Urban Livelihood Mission Directorate of Local Government, Punjab shed light on the scenario of construction of affordable housing in Punjab.
In the end, thanking all the key speakers and guests on behalf of the Department of Public Administration and IIPA’s Punjab & Chandigarh Regional Branch, the formal Vote of Thanks was proposed by the Dr Bharati Garg, Assistant Professor and Academic Coordinator, Department of Public Administration, Panjab University, Chandigarh.

CUPB made its place among top 10 per cent higher education institutions across world...

AdiGroup along with SV Group makes ‘formal education for...