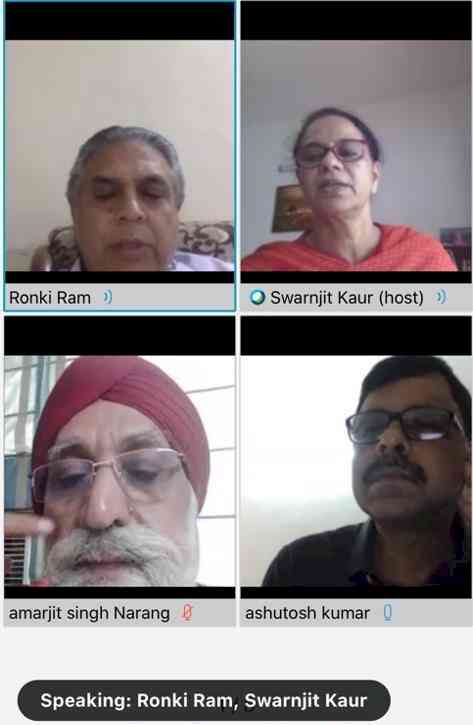 Chandigarh:     Panjab University Institute of Social Sciences Education and Research (PU-ISSER) organised a webinar on “100 Years of Shiromani Akali Dal (SAD)” today in which Prof. Amarjit Singh Narang, former Registrar and a retired Professor of Political Science from IGNOU New Delhi and Professor Ashutosh Kumar, Chairperson Political Science Department Panjab University Chandigarh presented their views.
Professor Swarnjit Kaur, Coordinator, PU ISSER initiated the proceedings by highlighting the role of PU authorities in facilitating the webinar. She also welcomed the guests, introduced the speakers and also the theme by contextualizing that in this journey of 100 years Akali Dal is not the lone player in the field of regional politics.
Professor Ashutosh Kumar gave a synoptic narrative of the hundred years of the chequered political career of the SAD and the pivotal role it played in shaping the politics of Punjab. He also covered the Punjab’s political and electoral dynamics in the process. The SAD as a ‘Panthic party’ was formed by a religious congregation to serve the religious and political interests of the Sikhs but the given territorial and demographic changes taking place in Punjab at the time of partition and after, the party found itself being trapped at the crossroads of region and religion. Resultantly, it transitioned from pursuing the politics of ‘representation’ in colonial Punjab to the pursuit of ‘a territorial homeland’ for the Sikh minority in post-partition India.
The devious competitive mechanisation of the Congress to weaken the SAD and the party’s own inability to draw the bulk Sikh votes impelled it to launch Dharam Yudh Morchas first for the creation of Punjabi Suba and then for demanding autonomy vis-à-vis an interventionist central state. The latter had disastrous consequences for the state due to the rise of militancy and the breakdown of the constitutional order in Punjab due to rampant factionalism and meek surrender of the party leadership to the radical elements. Post-militancy under the moderate leadership of Badal, SAD staged a comeback as a mainstream populist ‘electoral’ party in alliance with the BJP with discernible shift in its ideological focus and political practices. Claiming to represent ‘Punjab, Punjabi and Punjabiyat’, the party has been instrumental in effecting a paradigmatic shift from contentious ethnic agenda to the agenda for peace and development in the state politics. Last two decades have witnessed the party leadership decimating the autonomy of the SGPC and the Akal Takht, the two important Sikh institutions. The party has also shaded its robust democratic character and is no longer an ideologically rooted, cadre-based party.
Dr. Narang spoke about the dilemma of SAD to shift from an agitational party to a mainstream electoral party. As an electoral party SAD is expected of winning both urban and rural vote bank and also has to get the non-Sikh vote. However, the party has been unable to win even the majority of the Sikh vote.  While speaking about challenges being faced by the Party, he also pointed out the party's failure in addressing the farmers issues despite claiming to be a party of farmers. Professor Narang also referred to the rise of cultural agenda and the sikhs being in majority in Punjab and minority in India which puts the party in a dilemma.  Moreover, the federalization of polity and BJP emerging as the dominant party has allowed the SAD to shed its anti- centre politics and become sharer of power at the Centre.
Professor Ronki Ram set the interactive session rolling by adding that new connotations of globalization, modernization, cultural and identity issues would impinge upon performance of SAD- a “heritage regional political party”. Professor Swarnjit Kaur raised the issues of impact of emergence of Delhi Sikh Gurudwara Management Committee, significant rise in importance of the Party’s major alliance partner BJP and existence of Congress party as a strong regional force, as potential challenges to SAD in the times to come.
Dr Monica Munjial Singh, Chairperson, Centre for Social Work proposed a formal vote of thanks to PU authorities and webinar attendees from across northern India.

State level function on the birth anniversary of Satguru...