Motivate general public and children to plant trees through webinar 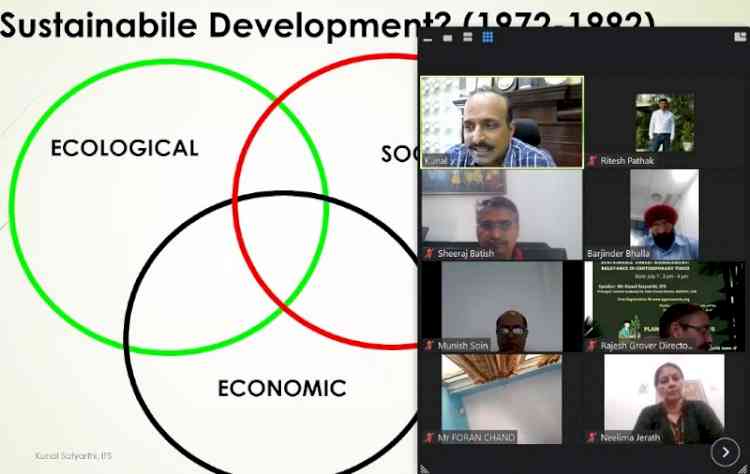 Kapurthala: In India forests is a major environmental resource. India is one of the ten most forest-rich countries of the world with rich biodiversity. According to national forest policy there should be 33 percent forest cover in India. According to Forest Survey of India forest cover has increased to 69.8 million hectares as per satellite measurements representing an increase of 5,871 square kilometers of forest cover in 2 years. At present, forest degradation was a matter of serious concern. Sincere efforts and awareness is required for saving flora and fauna in our country.  This was informed by Kunal Satyarthi,   IFS, Principal Central Academy for State Forest Service  MOEFCC, GOI on the occasion of Van Mahotsav webinar  which was organized by  Science City. The progamme was sponsored by Department of Forests & Wildlife Preservation, Punjab.
He said that, One million species of flora and fauna  are already extinct due to deforestation. Hence 50000 species are being lost annually that create imbalance  in our Eco-system.  This occasion is meant to educate and make people aware about the need of planting trees, as trees are one the best solution to control the global warming.
Dr. Neelima Jearth D.G Science City said that, Punjab should have at least 15 to 19 percent forest area as 84 percent land is under agriculture and Horticulture area. If Punjab wants to increase its forest area to 19% then more plantation activity is required. The Department of Forests and Wildlife preservation is taking it up under Green India Mission. However, this is possible only through public participation. Pushpa Gujral Science City is playing an important role to bring awareness on the environmental issues. PGSC harbours rich floral biodiversity with cactus garden, herbal garden and avenue of rare endangered species. It has 5500 trees having rich cultural and heritage value and Ashok Vatika. DG Science City urged the  students and teachers  to grow more and more plants for saving our mother earth. People were appealed on social media to plant trees around their homes  and send pictures to Science City. In response 271 people sent their pictures out of which selected pictures were uploaded on PGSC website.  Dr. Rajesh Grover Director Science City was also present on this occasion.

Heavy unemployed due to closure of hotels in HP: Sudhir Sharma

Seminar on threat faced by regional languages in India