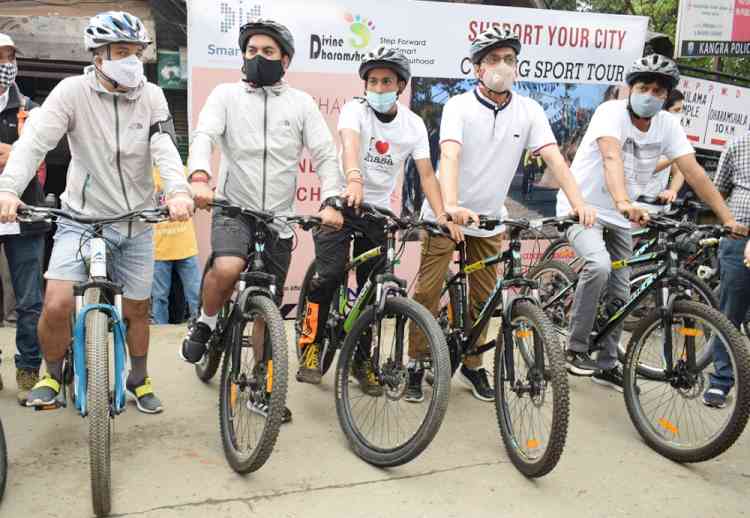 Dharamshala: To avoid diseases including corona infection and to keep  the public  healthy, a cycle rally  was organised  from McLeodganj on Wednesday in Dharamshala to spread a  message of awareness so that the majority of the residents of the city should turn to cycling.

The cycle rally was launched by MLA Vishal Nehria and Mayor Devendra Jaggi and both took part in the rally. The McLeodganj Chowk Via Dal Lake Road track was scheduled for this bicycle rally. Such  cycle rallies are being organised  in all the smart cities of the country under the directives issued by the Ministry of Urban Development, so that people make cycling a part of their daily routine to strengthen the environment protection, and make  people  healthy.

Nehria said, “ Two long tracks for cycling in the city have been marked, one  from McLeodganj to Mall Road via Farsethganj- Church to McLeodganj and second from  Dari-Siddhpur-Khaniara-Dadnu to Dari. At the same time, tracks will also be made along the small roads, so that the city officials and staff can use the bicycle to come to their working places. At the same time, it will help  people to use the bicycle in their daily life, including shopping.”

He added that yet another  cycle rally will be organized  soon by Smart City for a week-long re-awareness program in the city. The event will be held on Fatehpur-Mohli Road. “Apart from this, three to four such events will also be organized in other areas of the city, so that people can be encouraged to go for  cycling and also motivate their children for cycling,” said MLA.

Devendra Jaggi, the Mayor of Dharamshala Municipal Corporation said, “ In the old days  people used cycling in their daily life. Now too ,due to the lockdown of Covid period, when the plying of  buses ceased , people again turned to cycling. Now cycling tracks are being built in all smart cities of the country. Two long tracks have been marked in Dharamshala also . At the same time, small roadside tracks will also  be made in areas like Chilgadi Road, Khaniyara, Shamnagar etc. The Camel Road will also be used for cycling.``

Dharamsala MLA Vishal Naihari said that the Cycle for Change turned towards fighting Corona. He said that this will keep our health right and increase immunity. To give a boost to tourism development, Tourists will also be made aware of it, he said.
Pradeep Thakur, CEO of Dharamshala Smart City said, “All smart cities were asked by the Union Ministry of Housing and Urban Development to promote cycling. This program was organized to make people aware of cycling and such programs will be organized in future also. Right now two long tracks have been marked in Smart City, in the coming days short tracks will also be marked.”

Will Milsa reveal her intentions after being defeated by Baalveer and Vivaan?

Khaali Peeli trailer is out now

M3M Foundation comes forward to save lives by establishing...