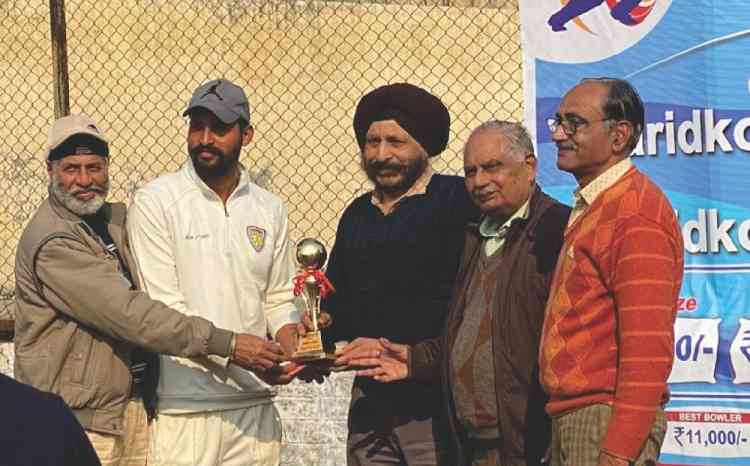 Man of the Match Ravinder Lefty of Faridkot in the match Fazilka DCA vs Faridkot DCA.

Chandigarh: Punjab level Trident Inter District Cricket Cup, 50 over’s each side one day tournament,  started today in various districts of Punjab as part of a campaign started by Padma Shri Rajinder Gupta, Chairman of Trident Group and Chairman of Punjab Cricket Association Mohali to promote the game at the District level throughout Punjab.

The league matches are being played at various district locations of Punjab on 7th, 9th, 11th Feb 2021 followed by Semi Finals on 15th Feb , second runner up on 17th Feb and finals on 18th Feb.  In total 15 district cricket association teams are participating in the tournament which is divided in 4 pool groups

Teams in Pool A,B &C will be playing 3 matches each whereas in the Pool D each team will be playing 2 matches. Top teams from the pools will meet in Semi finals and further winners of these semi finals will play for the top honors. The tournament Trident Inter District Cricket Cup 2021 has been approved by Punjab Cricket Association. Live scores of the matches played are also being made available at cricheroes.in/tournament/207793/Trident-Inter-District-Cricket-Cup
The tournament is sponsored by Trident Group of Companies and carries a cash prize of 1.50 lakh for the winning team, 1 lakh for the runner up team, 50000 for the team at third place. In addition, a prize of 21000 will be given to the man of the series, 11000 to the best bowler, 11000 to the best batsman, 11000 to the best wicket keeper & 11000 to the best fielder in the tournament.

Eyes on Saina's injury as badminton teams get ready for...