The tournament to be hosted for the first time in Hyderabad 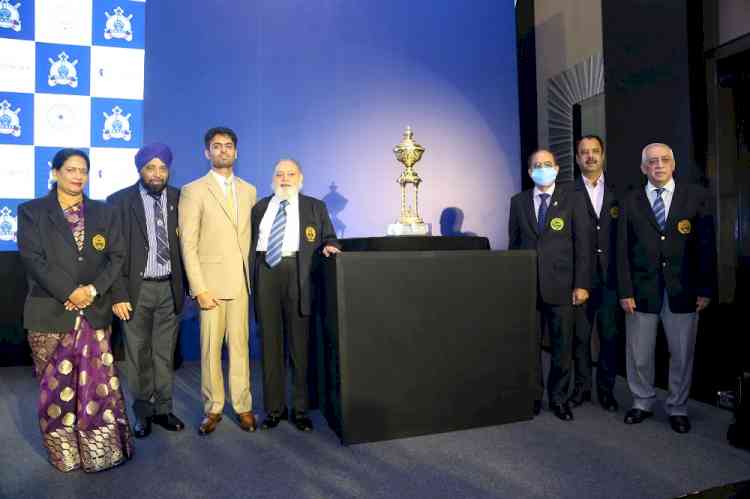 Hyderabad August 19 2021: The Jawaharlal Nehru Hockey Tournament Society (JNHTS), which has been conducting the country’s most premier hockey tournaments since its inception in 1964, founded by Shri Inder Mohan Kapur (Shri I.M. Kapur) for the first time in 56 years, moves its senior and most prestigious tournament from New Delhi to Hyderabad. Founding this society marked the first philanthropic pursuit of Shri I.M. Kapur.

Gooncha Estates Pvt Ltd (Part of the Gooncha Group) is the title sponsor for the 57th edition. This tournament is being conducted in honour of the JNHT Society’s Founding Father, Shri I.M.  Kapur. The 19th day of August 2021 marks his first death anniversary. To commemorate this, the ‘Nehru Senior Gold and Silver Cups’ which were donated by Shri I.M. Kapur and have been in circulation for 56 years have now been melted and recrafted in the exact same design to be hereon known as the ‘Inder Mohan Kapur Nehru Senior Winners’ & ‘Runners-Up Cups’ respectively. Shri I.M. Kapur (Industrialist and Philanthropist) is also the Founding Father of the Gooncha Group.

This Society was incorporated in the fond memory of Independent India’s first Prime Minister, Pandit Jawaharlal Nehru to promote the ecstatic National Game of Hockey. Ever since, no stone was left unturned to take it to a superior league. Gaining appreciation from various quarters. In the years to come the tournament was to be graced by Presidents, Vice-Presidents, Prime Ministers and Union Cabinet Ministers of India.
The Nehru Cup matches have keenly been looked forward to and it has been an honour for any hockey team to win the coveted Nehru Gold Cup.

Gooncha Estates Pvt Ltd will also be launching the Inder Mohan Kapur Lifetime Achievement Award for excellence in hockey. This will be dedicated to a hockey personality for a lifetime of service to the game as either a player/coach/umpire/administrator with a glittering award comes a cash prize of Rs. 5 Lakhs. This will be given away on the 25th of November, 2021, by the guest of honour, after the final match.

On this occasion, Shri Kukoo Walia, Hon. Secretary General of JNHT Society, paid rich tributes in loving memory of the late Shri I.M. Kapur. Recalling all the stories he had heard from his predecessors in the society, he said, “it is our honour to embrace this chance of paying tributes to a legend whose teachings continue to pave the way to society in general. I believe that the Gooncha 57th Nehru Senior Hockey Tournament will indeed be the most spectacular tournament in JNHT Society’s history. I am thankful to
Shri Yash Bharwani Hon. Vice Chairman, Organizing Committee; (Executive Director, Gooncha Group) for signing this MoU and joining hands to further glorify our society.”

On this occasion, Shri Yash Bharwani, Hon. Vice Chairman, Organizing Committee; (Executive Director, Gooncha Group) said, “I am humbled and honoured in a sense of nostalgia to be able to sponsor this glorious tournament with a tremendous past. In honour of my grandfather, whose first philanthropic deed was founding this great society, I feel euphoric to inform everyone that this tournament marks the Gooncha Group’s First Corporate Social Responsibility Initiative. I hope that we can live up to the Society’s expectations that Mr. Walia has been redefining over the years.”

On this occasion, Shri Subhash Kapur, Hon. President JNHT Society (Chairman, Steelbird Hi-Tech Ltd)
said, “The Gooncha 57th Nehru Senior Hockey Tournament has brought all of us greater hopes not only from Jawaharlal Nehru Hockey Tournament Society but from all the best performing hockey teams of the country to improvise and perform better in the coming months. I would, from the bottom of my heart, like to thank Smt Arti Bharwani, Hon. Chairperson Organizing Committee; (Chairperson of the Gooncha Group) and
Shri Yash Bharwani, Hon. Vice Chairman, Organizing Committee; (Executive Director of the Gooncha Group) for sponsoring the senior tournaments for the 57th edition, in the honour of our Founding Father, the gratitude for who’s contributions to society we shall always be grateful for, will these tournaments be conducted. As we break the news of these tournaments on the day that completes one year of him leaving us, we commit to continuous improvisation of our leagues, to accomplish further every year. I would also like to thank all our committee chairpersons. We will work to further fortify our beloved Shri Inder Mohan Kapur’s founded society. I wish to express my gratitude yet again on behalf of our organization to be associated with Gooncha, which is again, a firm founded by him.”

The Gooncha Group is the title sponsor of the 57th Nehru Senior Hockey Tournament, which will be conducted at the South-Central Railways Sports Complex in Hyderabad from November 14th to 25th, 2021. The total prize money for the teams and players in the premier tournament is around Rs. 10 lakh. The winning team will stand to receive Rs.4 lakhs, the runners-up will bag a purse of Rs.2 lakhs, and the ‘Best Player of the Tournament’ will take home a Benelli Imperiale 400 BS6 Classic Motorbike. Besides this, the tournament organisers will be presenting the ‘Player of the Match’ award for each match with a FLASH hockey stick.