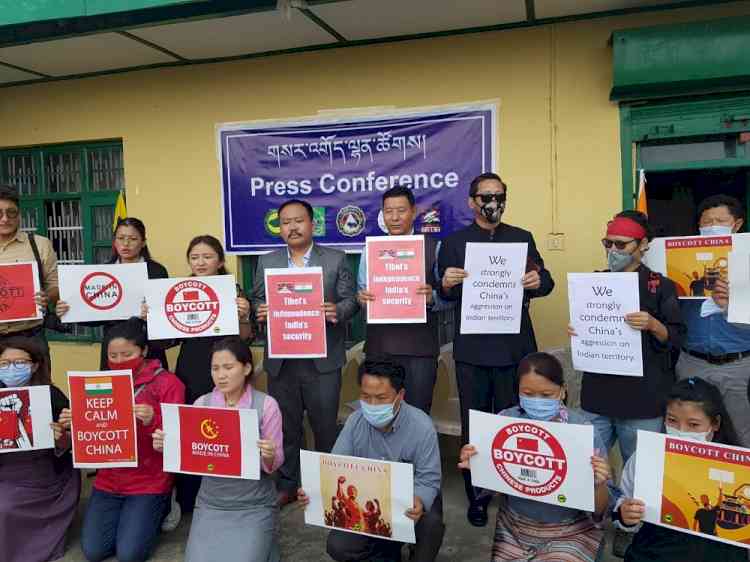 Dharamshala: In a joint statement released by Tibetan NGOs, it is said that the Tibetan community stands with India at this hour. The statement was issued in a joint press conference organised by Tibetan Youth Congress, National Democratic Party of Tibet, Students for a free Tibet and Tibetan women association in McLeodganj North India on Friday.  The members of these organisations carry posters saying, Tibet’s independence- India’s security, boycott made in China, keep calm and boycott China and we strongly condemn China’s aggression on Indian territory.
The organisations said that they condemn the attack of China on Indian soldiers at  Indo -Tibetan border in Ladakh Galvan Valley in which  20 Indian soldiers have been martyred, including a commanding  Officer. This Chinese invasion has proved to be the deadliest in India sovereignty over a period of 45 years. They said that the Tibetan organisations respect and honour the soldiers who lost their lives and express the heartfelt tribute to their families.
The organisations said, “Now the governments and leaders from all over the world are expected to take strong action against China and their occupation policy by uniting with India for the illegal invasion of Indian Territory by Chinese army.”
They said that the liberation of Tibet is the real safety of Indian borders, as it was before the invasion in Tibet by the people's liberation army in 1949.
The organisations said, “As we stand in solidarity with India, we invite the Government of India and the international community to undertake this task, a statement should be issued by the international community immediately against The Chinese military invasion of Indian Territory, so that it can be strongly condemned.” It said that India and world governments should recognize Tibet as a separate historically independent country.  Tibet is under illegal occupation of China which is a threat to international peace. The international community should respond economically to China by joining the Indian grass root movement to boycott the products made in china.
Based on a Central Tibetan Administration (CTA )survey from 2009, 127,935 Tibetans were registered in the Diaspora: in India 94,203; in Nepal 13,514; in Bhutan 1,298; and in the rest of the world 18,920. However, their number is estimated at up to 150,000, as mentioned by the 14th Dalai Lama in 2009.