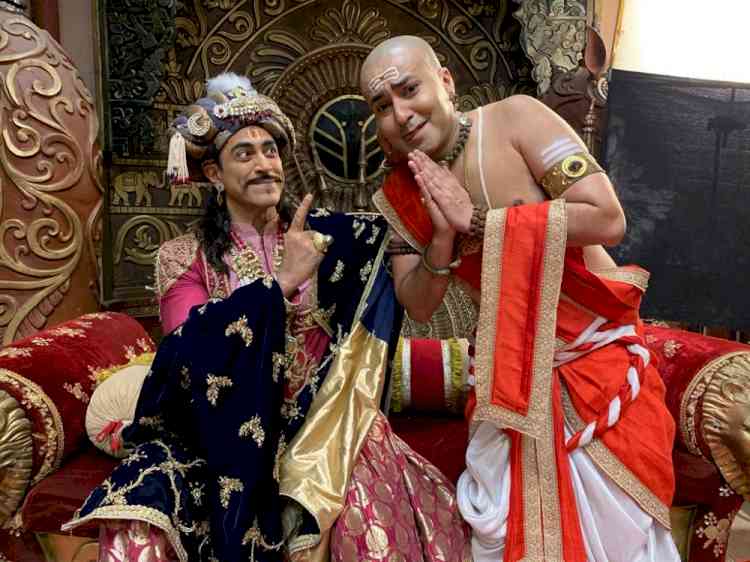 Sony SAB’s widely acclaimed historical fiction show, Tenali Rama, continues to win viewers’ hearts by reviving the ancient tales and anecdotes of the legendary scholar and poet Tenali Rama and taking them right into the heart of Raja Krishnadevaraya’s Vijayanagar. The show continues to gain immense love and support for its engaging and values driven storyline that offers entertainment across all ages in a family.

Talking about the glorious success on television and sharing their experience so far, Krishna Bharadwaj – everyone’s beloved Pandit Rama Krishna and Tarun Khanna – the celebrated king Krishnadevaraya, get candid about their journey so far as artistes and a lot more.

Krishna Bharadwaj, better known as Pandit Rama Krishna since past three and a half years shared key highlights of the journey so far, “I have lived this character for so long that I do not even remember my life before Tenali Rama. Pandit Rama Krishna is a part of me, and I am so glad that I have had the opportunity to adopt all the noteworthy qualities of Rama. This show has given me immense love and support from the fans, and it is indeed a heartwarming feeling when a character succeeds in creating a positive change in someone’s life. A lot of fans reach out to me talking about how the show made them smile or helped them cope with difficult times. As an actor, it is really fulfilling."

Krishna further added, "I feel, I was in my destiny to play the character of Pandit Rama Krishna and my preparation started right since I was a child. I belong from a Hindi speaking background with my father being a Ph.D. holder, and my uncle also a post-graduate degree holder in Sanskrit. So, for me language was not a problem. My interpretation and inspiration of Pandit Rama Krishna has been that of a modern Lord Krishna.”

Talking about his learnings through the show and his character, Krishna said, “Tenali Rama brought a unique combination of comedy and intelligence together. My greatest take away has been Rama’s sheer wit and intelligence. Pandit Rama Krishna’s energy is really vibrant, and I have learnt how one can be happy and content in life. One of my greatest takeaways from the show has been the fact that to in order to do comedy, one does not need to insult someone or make fun of someone. Tenali Rama has hit the mark to provide the ultimate light-hearted comedy for all age groups.”

Tarun, while sharing his views on the reasons behind the success of this show, said, “Since my childhood till now, I have never come across a show that is a total family entertainer and at the same time high on values. Tenali Rama is a show that familiarizes the audience with our Indian culture. In my family my 6-year-old son and my 75-year hold father-in-law watch this show together. There are hardly any shows that can bring such distinct age groups together. The characters have been so beautifully and cleverly designed that even a character like Amma who has no dialogues in the show has been loved. The characters are so well rounded and unique that makes him stand out in any situation. This is immense hard work and dedication that has determined the success of this show.

Sharing about their experience of working with one another, Krishna said, “I feel Rama and Krishnadevaraya’s character are like Lord Krishna and Sudama. Rama practically worships Krishnadevaraya and would do anything for him. So, the chemistry between these two characters are really important for the show. After Tarun’s arrival on the show, we never lacked the chemistry. It was there since day one.” Adding further, Tarun said, “I was thrilled to be a part of this show as it is fulfilled my childhood dream of being a part of the world of Tenali Rama. Before joining the show, I had not watched any of the episodes and I got the glimpse of Krishna’s talent on my first day of the shoot. I have rarely seen artists who have such a stronghold on their language and Krishna is certainly one of those few actors.”

Krishna and Tarun concluded by saying, “The show will be a benchmark of our lives, while it gave one the biggest break of his career whereas it fulfilled the childhood dream of the other.”

Kinjal and Vishal’s chemistry is special in this Navratri...

Singer and performer Purva Mantri rank amongst the finalist...