Terrorism and extremism are enemies of the state, avers experts 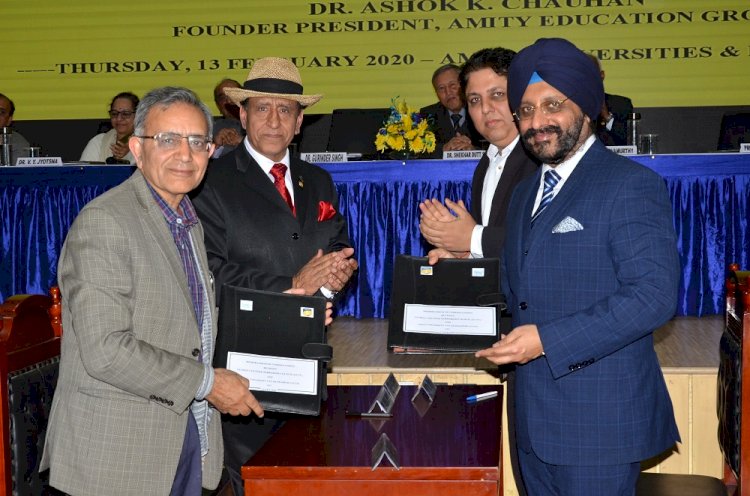 Noida: Amity University, Uttar Pradesh (AUUP) signed a Memorandum of Understanding (MoU) with Global Counter Terrorism Council (GCTC), New Delhi, a premier ‘Think Tank’ of the country to work together in a meaningful manner to tackle the menace of terrorism affecting the nation and the world. Experts opined that countering terrorism is an interdisciplinary job and every citizen can contribute in a small way to secure the country and find their own solutions. They also shared that both terrorism and extremism are enemies of the state.

Dr. Shekhar Dutt S M, Patron GCTC & Former Governor of Chhattisgarh shared how terrorism is a challenge that is entirely manmade. “The importance of understanding the phenomena of terrorism has achieved significance ever since low intensity warfare tactics were developed by our neighbor. Even the rise of LTTE in southern India had created lot of disturbance within the country. Therefore, it became important to understand the globality of terrorism phenomena and its effect within the country,” shared Dr. Dutt. He also averred how this collaboration with Amity University that has a fantastic array of different sectors of study and specialty of teaching and learning will be fruitful in creating citizens of tomorrow to counter terrorism.

Mr. Shashank, Patron GCTC while talking on “Global Counter Terrorism & Implications on India” shared how every citizen has the responsibility to anticipate problems and work on their solutions for a peaceful nation. “Young people of the country have to be mindful of not getting influenced by negative forces leading to radicalization of minds. Dialogue and peaceful measures need to be adopted to tackle issues of conflict not just in India but across the globe. Amity University has the structure and GCTC has the concepts that has made this association more meaningful to facilitate knowledge exchange and counter this growing threat,” said Mr. Shashank. He also added how GCTC has undertaken the mission to join hands with more education institutions to see that the country’s ultimate objective is achieved of becoming a terror-free nation.

Students present on the occasion also asked a series of questions to the panel of experts from defence and allied services on whether state sponsored terrorism was a myth or reality. Another student from Amity Institute of Defence & Strategic Studies (AIDSS) posed a question on whether controlling weapon transfer could be a key factor to counter terrorism.

As part of the association, seminars, panel discussions, internships and various other programmes will be incorporated in extensive areas of cooperation. The GCTC will also collaborate academically on contemporary strategic issues to formulate the ‘Overall Strategy’ & the ‘Road Map’ to mutually benefit Amity students and the institutions.

Workshop on SAXS and AFM organized in CIL, PU