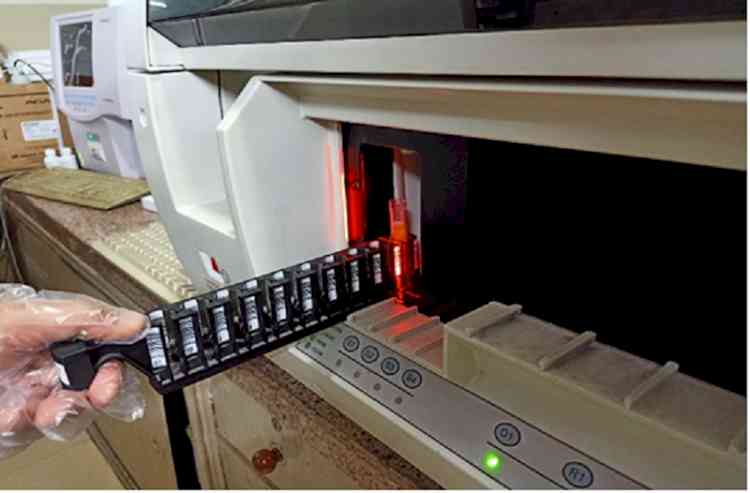 Ludhiana: Christian Medical College & Hospital, Ludhiana, (CMC) has announced the establishment of a new test, to diagnose patients suffering from a bleeding disorder called Von Willebrand Disease (VWD).
VWD is the commonest form of bleeding disorder in the world with a prevalence of 1 in 100 population. Although most of this are milder forms, patients may not get diagnosed. This occurs equally in males and females and 95% of females having this disease, present with menorrhagia or heavy menstrual loss.  Due to the lack of availability of this test, very few patients have been diagnosed.
Dr.  William Bhatti, Director, CMC, said that he is delighted that this test can now be made available in Ludhiana. PGIMER is the only other Institution which has this facility in Northern India.
Dr. Poojitha Byreddy and Mr. Markas Masih, from Clinical Haematology Department, were sent to CMC Vellore, Tamil Nadu, for special training, before the Covid-19 lock down. On their return, they mastered the techniques to establish the procedure at CMC Ludhiana, over the last few months. The Lab is now able to perform von Willebrand’s Antigen and RiCof in an automated platform, which are the 2 important tests required to diagnose this disease.
It is important to process the sample immediately and maintain below freezing temperatures, to analyse the samples in bulk. Hence sending the unprocessed samples, in room temperature, to outstation private labs is not a suitable alternative.
vWD patients can also be often misdiagnosed as mild haemophilia A. This facility will accurately diagnose and give the necessary treatments.
Dr. Kavita Bhatti, Head of Gynaecology mentioned that, according to CDC (Centre for Disease Control and Prevention), this is a bleeding disorder which is seen equally in males and females. Among the female patients who were diagnosed with this disease, 95% presents with heavy menstrual bleeding, 92% with bleeding after minor injuries and 76% with excessive gum bleeding.
This disorder is currently underdiagnosed in India, which has a significant impact on the health and socio economic status of affected patients, especially post pubertal females.
Dr. Anil Luther, Medical Superintendent remarked that this was a welcome addition, at the 10th year of establishing the comprehensive Haemophilia care set up, for the people of Ludhiana.

‘The Narrators’ starts online campaign ‘Save the Art & The Artiste’ in bid to revive...

Once again PM’s address to nation disappoints us: IDPD

UNDER GUIDANCE OF DC and CP, NGO COMES UP WITH AWARENESS...

Farmers and farm labour allowed to harvest and sow their...