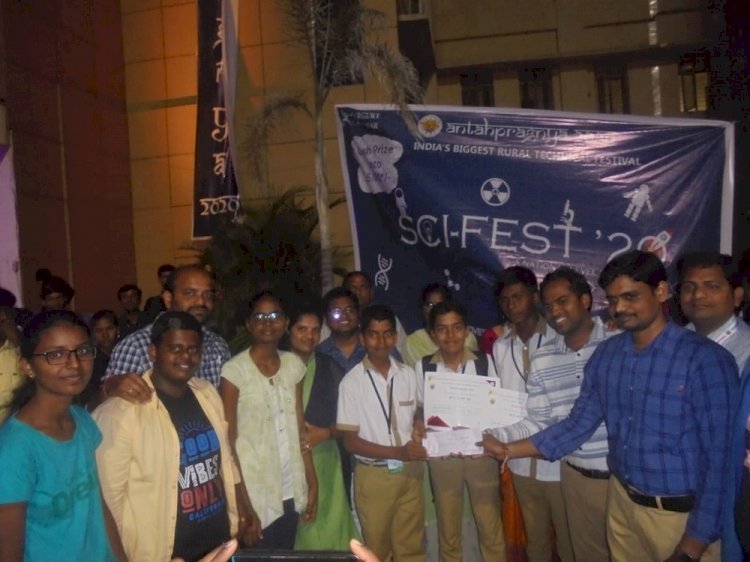 The aim of the science fair was to provide an opportunity to young students to refine and showcase their ‘Knowledge of today’s science which becomes Technology of tomorrow’. The participants showcased their working models on different topics viz. Agricultural Technologies; Water Management; Energy Generating Technologies; Best from waste; Green Energy; Bio-Fertilizers; Road Safety and Fire accidents; Technologies for women protection; Pollution Control Methods; and Traffic Management.

The young kids from various schools came forward to present prototypes of innovative models offering solutions to diverse problems. A team of three young kids from class 6 and 7 of Kendriya Vidyalaya No.1, Uppal, Hyderabad showcased Drowsy Driver Detection & Alerting System. The system consists of spectacles to be worn by the vehicle driver made using sensors and Arduino, an open-source electronic prototyping platform enabling users to create interactive electronic objects. There were two sensors employed in the prototype – one to monitor eyes blinking and give off an auditory alarm when the driver closes his eyelids for more than 3 seconds and another to check alcohol content through breath analysis. Most of the accidents are caused by drunken driving and drowsiness informed Vaishak, Shreyash (both of Class 6) and Aaron (Class 7). The kid’s team was accompanied by their trainer Praveen Ollala. Kids of such young age being aware of this problem and coming up with a solution are testimony to the ingenuity of today’s generation.

In the two days (31 Jan, 1 Feb) that the science fair was held over 5000 plus school students from different schools in nearby towns and villages visited it.

Cash prize of up to Rs.25,000 were offered by RGUKT-Basar for the winners. The winners were announced in the evening.

The first prize comprising of Cash Prize of Rs.10,000/- along with Excellence Certificates were given away. Two teams won the first prize.

The project on ‘Segregation of Dry and Wet Waste’ of Kendriya Vidyala, Uppal team comprising of Harsha, Manjima and Mehek along with Mentor teacher Mr. Praveen won first prize.

Along with this, the project ‘Automatic Fertilizer Dispenser’ of Telangana Model School, Shankerpalli team comprising of Md. Amer, Nagdeesh along with Mentor Vinay Kumar won the first prize.

The third prize comprised of Cash Prize of Rs.2000 along with certificates was won by Project ‘Wastage removal from Water’ of Vignan High School, Nizamabad comprising of N. Nithin and A. Rakesh Redd along with Mentor K. Sanjeev Kumar.