26 acres to be earmarked for construction of 5-star hotel, food court, taxi stand and shops 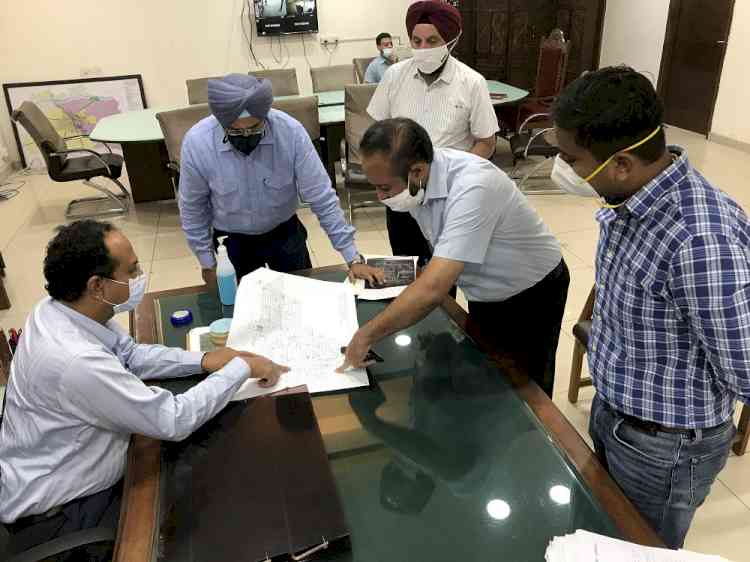 Ludhiana:     Deputy Commissioner Mr Varinder Sharma today said that the estimate of Rs 21 crore for construction of 4 km long retaining wall and road leading to the airport have been forwarded to the state government. He said that once this estimate gets cleared, the construction work in this regard would start soon.
A review meeting in this regard was held in the Deputy Commissioner office, here today, which was attended by ACA GLADA Mr Bhupinder Singh, SDM Raikot Dr Himanshu Gupta, besides several others.
The Deputy Commissioner informed that 4 kilometre long retaining wall would be constructed around the 161.2703 acres acquired for the construction of civil terminal of Halwara International Airport. He said that 26 acres have been earmarked for the construction of a taxi stand, food court, a five-star hotel, two-storey shops, besides other amenities, while 135 acres would be used for constructing the civil terminal.
He said that the road leading to the airport site would also be widened and the PWD (B&R) and the officials have been directed to start the work on the boundary wall of the international airport at the earliest.
While providing information, he said that with the start of international flights from Halwara Airport, the area would develop as a business hub, that would boost the economy of the state.
He informed that the 161.2703-acre land required for the construction of this the civil terminal has already been acquired and Greater Ludhiana Area Development Authority (GLADA) has taken possession of the said land. He said that they would try to get the construction of runway completed on priority basis along with the construction of the terminal building so that the international flights can start operating from here soon.
He informed that in lieu of the acquired land, the farmers have been paid a compensation of Rs 20,61,314 per acre (including 100% solatium, 12% AP and 1.25 multiplier factor). Besides, each eligible family would also be paid Rs 5,50,000 as rehabilitation and resettlement amount.
The Government of Punjab and the Airport Authority of India had signed the Agreement for a Joint Venture for setting up New Civil and Cargo International Air Terminal at the land of Aitiana village in Tehsil Raikot at IAF Station Halwara, Ludhiana. The coming up of this International Airport would boost economic development, would generate employment opportunities and bring in tourism in the area.
It is pertinent to mention that with the construction of this International Airport, long pending demand of the Ludhiana residents would be fulfilled. The Punjab government is making efforts to ensure that this airport becomes operational in the next two and a half years. In the first phase of the project, which will include the development of a new international civil terminal over an area of 135.54 acres for full-fledged operations up to Code-4C type aircraft.
The project shall be implemented through a Joint Venture Company (JVC) is formed with the majority stake of 51% of the Airports Authority of India (AAI) and 49% stake of the State Government through the Greater Ludhiana Development Authority (GLADA).