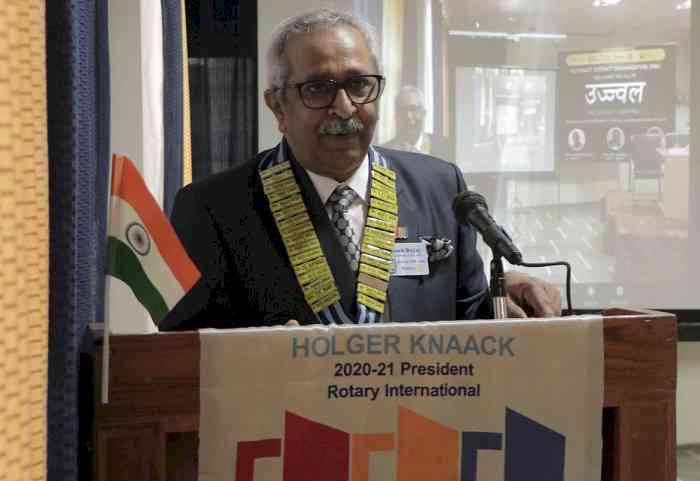 Chandigarh: Rotaract District organisation 3080, organised "Ujjwal", the district assembly installation ceremony of DRR Samir Madan and his team at Rotary House, Sector 12 Panchkula with all the social distancing measures in check; live streaming of the event was also done for Rotaractors, to ensure maximum participation in these tough times.

Installation ceremony marked the passing of baton from outgoing Immediate Past DRR Rtr. Ishita Kaith to Rtr. Samir Madan with a belief that he will do justice to his position of responsibility. Staying true to their roots, attendees came together for the national anthem followed by lighting of the lamp by chief guest of honor Rtn. DG Ramesh Bajaj to commence the joyous event.

Enthusiasm and cheer was all around as Rtr. Samir Madan was "collared". He came forward to share insights into his vision and future course of action and declared the theme of the year as "Together we believe". He extended a heartfelt thank you to DG Rtn. Ramesh Bajaj, DRCC Rtn. V. K. Sharma and outgoing IPDRR Ishita Kaith for showing confidence in him. With his speech he announced his target to achieve the highest number of clubs by the end of this tenure. He also highlighted the importance of Retention in Rotaract," I can’t underline too strongly how important retention-that one simple word-is to Rotaract’s survival. I think Rotaract’s future is with us, the people; the young generations. Being a Rotaractor is about the people we help. At the end of the day, the only thing that matters in Rotaract is how much better the world becomes because Rotaract is in it, because we made a difference!" said Rtr. Samir Madan in his address to all the Rotaractors. It was a proud moment for all his fellow Rotaractors and associates.

The district council members were also beaming with pride during their installation and pinning ceremony.  IPDRR Rtr. Ishita Kaith also congratulated DRR Samir Madan and the district council member on this feat and expressed her joy saying that, " It is always wonderful to see Rotaractors come up and take charge, it's necessary to share responsibility in order to develop a more effective work environment. The installation ceremony has firmed my belief that we are on our way to reach new heights."

The installation ceremony also saw DG Rtn. Ramesh Bajaj encourage and motivate the members with his kind words, " Grateful for the hardwork and support of my fellow Rotaractors. It is your hardwork that makes us level up and reach the social goals we have set. I am happy to say that this year we have successfully supported so many social causes and I am affirmative that in the next tenure, in DRR Samir Madan and district council members responsible hands, we will take new leaps."

The event concluded on a positive note leaving the members exuberant and passionate for working even harder in the tenure.

Keeping your voice healthy needs some precautions and some rest also, advised DMCH...

Justice has been done, will allow family to mourn Sunanda...

Notice to Himachal Chief Secy for 'converting' school into...