The team of scientists working on SPNF at the University main campus, RHRTS Mashobra and KVK Tabo took part in the meeting 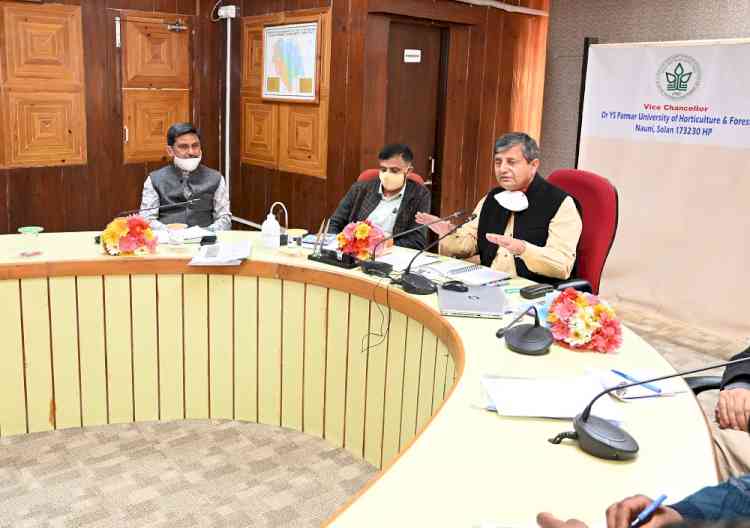 The team of scientists working on SPNF at the University main campus, RHRTS Mashobra and KVK Tabo took part in the meeting. Dr. Subhash Verma, Coordinator of the SPNF at the university presented the progress report of the research activities on various crops carried out over the past year.

Speaking on the occasion, Rakesh Kanwar congratulated the university scientists for working towards establishing science-based findings on the farming technique. He said that the work done by the university will help to develop the Package of Practices for the farmers in the future. He informed that over 1.2 lakh farmers from all districts in majority of the panchayats of the state have adopted natural farming and the feedback received from them is very encouraging. He suggested that the university could link up with these farmers to broaden their field study. Dr. Chandel was of the view that the university should also develop some agroforestry models under the SPNF so that a five-layered system could be made. Collaborations with farmers for seed production of local varieties under this were also discussed.

Vice-Chancellor Dr. Parvinder Kaushal said that the university would collaborate to find out the effectiveness of the low-cost storage and processing technologies and protocols developed by the university under the natural farming technique. He was of the view that research on traditional crops grown in the state could also be undertaken under this system. Dr. Kaushal urged the scientists to sincerely work towards the sustainability of nature by developing a credible alternate system of farming for the farmers.

Four side open plaza to be built in heart of Mohali

KMV continues its fight against covid-19

Jindals’ Mother’s Care to nurture children and help them...