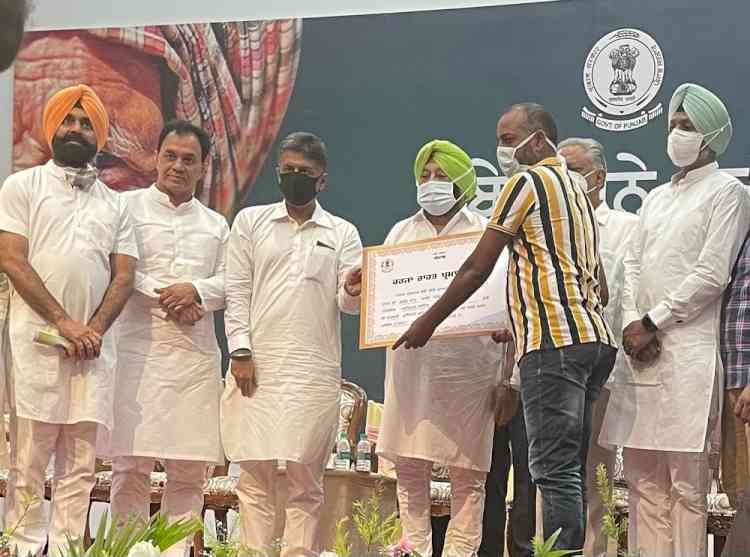 “I hope and wish a day will come when India will be free from poverty, which is Rajiv Gandhi dreamed about,” said the Chief Minister, dedicating the important scheme to the state on the 77th birth anniversary of his close friend. Noting that Rajiv was a close friend, Captain Amarinder said the former Prime Minister used to always ask when the day will come when people will have their own houses to live and India would be free from poverty. He, therefore, thought it apt to launch this scheme on the birth anniversary of Rajiv, said the Chief Minister, adding that the Congress had fighting for the people for the last 130 years.

The Chief Minister said his government had decided to waive off loans amounting to Rs 520 crores of farm labour and landless farmers with respect to the principal amount against their cooperative loans as on July 31, 2017, and simple interest @ 7.00% p.a. on the above amount till 6th March, 2019. It is noteworthy that the state government had earlier waived off Rs 4700 crore worth of loans (up to Rs 2 lakh of crop loan each) for 5.85 lakh Small and Marginal famers.

Declaring that his “heart is with the farmers who are protesting at the Delhi borders”, the Chief Minister made it clear that he does not agree with the stand taken by the central government, who are not listening to the farmers. “We have amended the Constitution 127 times, so why are we not doing it now? Why is the Government of India standing on prestige on the issue of the Farm Laws,” he asked, adding that he had categorically urged the Prime Minister and the Union Home Minister to repeal the legislations.”

The Chief Minister said he had been asked to stop Punjab farmers from going to Delhi “but I never stopped as everyone has the right to protest in the national capital; protest is a democratic right.” “These small farmers are not fighting for themselves but for their coming generations,” he said, questioning why the Centre could not see the pain of the protesting farmers. These farmers are mostly those who own an average of 2.5 acres of land, he pointed out, recalling that during a visit to Poland long back he had seen that country increasing the land ceiling from the existing 40 acres to 100 acres as families could not feed themselves with such small land holdings. “So you can imagine what will happen to those who have just 2.5 acres,” he remarked, asking “how will they feed their families if the new laws are imposed on them?”

Pointing out that around 400 farmers had died, he said his government was giving Rs 5 lakh to the families of the state’s farmers who had lost their jobs. In addition, they were being given jobs, and 200 had already got their appointment letters, he said, adding that the Centre need to protect the MSP and the market system as well as the age-old relationship between the farmers and the Arhtiyas in the interest of the nation.

In a token gesture to launch the scheme, the Chief Minister personally handed over cheques to 21 farm labourers and landless labourers, with Ministers and MLAs set to disburse the cheques to all others over the next few days.

Recalling that farmer suicides were a common affair when his government took over in March 2017, the Chief Minister said they had undertaken the task of identifying the poor farmers and found that around 15.7 lakh landless farmers and farm labourers constitute 48% of the state’s 32.7 Lakh Rural Households (Census of 2011). Another 9.8 lakh were Rural Cultivating Households (30%), he said, adding that together, the people engaged in agriculture account for 78% of Rural Households. He lauded them for carrying on their operations to produce bumper crops and continuing to contribute to the state’s economy despite the threat of COVID, which had claimed the lives of 16000 Punjabis so far.

Underlining his government’s commitment to the welfare of the farming community, the Chief Minister said agriculture in the country today stood at the crossroads as a result of growing rural indebtedness and farmer suicides. The lack of suitable crop insurance by the central government, the high cost of inputs and the Centre’s failure to implement the recommendations of  Swaminathan Committee in letter and in spirit were compounding the farmers’ woes, in addition to the vagaries of the weather, he said.

Besides free power to farmers, which he said “will continue till I am there”, his government had ensured nine hassle-free procurement seasons with timely payments and had launched Mission Lal Lakir to create land records within the Lal Lakir and provide easier access to credit, said Captain Amarinder. Further, he said he had written to the Prime Minister to amend the Legal Services Act to enable Free Legal Aid to farmers for any revenue civil or criminal case.

The Chief Minister spoke about other similar debt relief programmes have also been launched by the Captain Amarinder government since it took over the state’s reins in 2017. The One Time Settlement Scheme-2017 was launched for borrowers of Cooperative Banks and benefitted 5,941 persons  to the tune of Rs.128 Crores. The New Debt Settlement 2020 has already benefitted 3369 persons with total debt relief of Rs. 78.04 crores so far, and will continue till January 31, 2022.

In response to Speaker Rana KP Singh’s concern on the plight of small traders and urban shopkeepers amid the pandemic, the Chief Minister assured of measures to support them too, while ruling out any further lockdowns with the hope that the state would be spared a third wave of Covid. The Speaker lauded the Chief Minister for the state’s decisive battle against  Covid, and his role in breaking the backbone of the drugs trade and ending gangsterism in the state, along with waiver of farmer loans and timely payment for their crops.

Earlier, MLA Raj Kumar Verka termed the debt waiver of farm labourers and landless farmers a historic step towards the realization of Rajiv Gandhi’s vision. Lauding Captain Amarinder as ‘Vikas Purush’ and saviour of Punjab’s rights, he said the scheme launched today was just the beginning of a “Kushal Punjab.”

Manish Tewari, MP, said despite growing interference from Pakistan and ISI, and the stepmotherly treatment being meted out by the Centre, Captain Amarinder had governed the state in a remarkable manner, showing commendable leadership in handling the Covid crisis. No administration can run with speeches and false promises, it runs with experience, which Captain Amarinder has, he added.

Solid waste management plant to be set up in all villages...