Theme of lecture was emerging trends and patterns in Indian politics 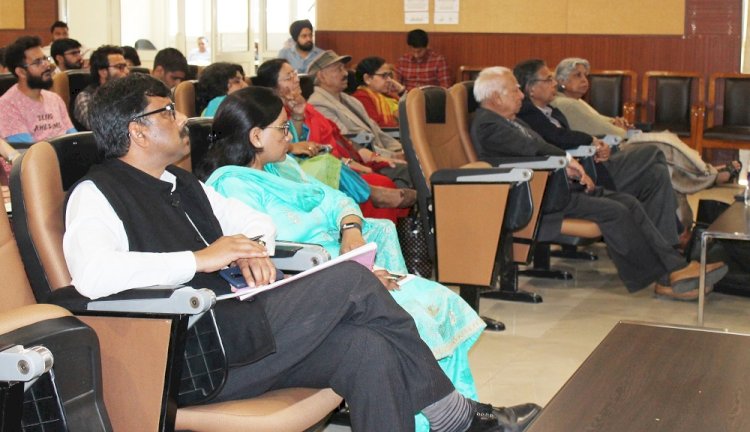 What has contributed to this increased participation of voters in recent decades? Professor Kumar argued that the increasing electoral participation during last one decade is largely because Indian voters being far more sharply divided on party lines compared to the past. A very large majority (65%) Indian voters vote keep in mind the party and with sharper division of voters on party lines, loyal supporters of various political parties are getting more motivated and turning out to vote in much bigger numbers now compared to the past. This increased loyalty towards political parties has resulted in decline in the proportion of what is popularly referred as Floating Voter Â Yet another related  question is: does this increased turnout indicate any specific trend? Does increased turnout indicate an anti-incumbency mood of voters?  In election studies, higher turnout is considered a sign of anti-incumbency mood of the voters as voters are supposed to express their dissatisfaction with the incumbent  government. An alternative view is that increased turnout is a sign of pro-incumbency mood as voters turnout out to vote in big numbers in support of the ruling party. And both the views are expressed very emphatically without any application of any reality check. A reality check suggests there is no relationship between turnout and electoral outcome, turnout has increased, and candidates have got defeated and vice versa. Similarly, turnout has declined and sitting candidate or ruling parry has got defeated and vice-versa.

Even the state level the electoral contests are decided far more convincingly now compared to the past. The party which wins elections win by a handsome margin. There are some exceptions in in recent years (Haryana, Jharkhand) The Delhi elections is a latest example in series of states.

Yet another reason for the higher turnout is that Small town have become the real hub of Politics/Elections in India as voters in Small town are participating in elections mbers much more than in villages and in big cities.

Though participation is good but there are some sings of anxiety as well. There is an undue influence of Money and muscle power in Indian elections. It has become worse in last two decades. The number of tainted elected representatives both in National Parliament and State assemblies (MP, MLA) has increased enormously over the years. This is because Indian voters largely vote for their party and do not look at the merits and demerits of the candidates. They fail to evaluate/examine the candidate on the bass of their merits and demerits.

Prof. Shankarji Jha, Dean University Instruction and officiating Vice Chancellor was the Chief Guest and Prof. Ashutosh Kumar, chaired the lecture. DUI referred to Arth Shastra as the first political test which was the contribution of ancient India. He added that in Indian knowledge Tradition, the King has the Raj Dharma to serve his subjects.

Workshop on prevention of plagiarism in higher education

1863 students from 207 schools participate in e-Sabyatech...

Ministry of Jal Shakti, GoI honours KMV for its contribution...