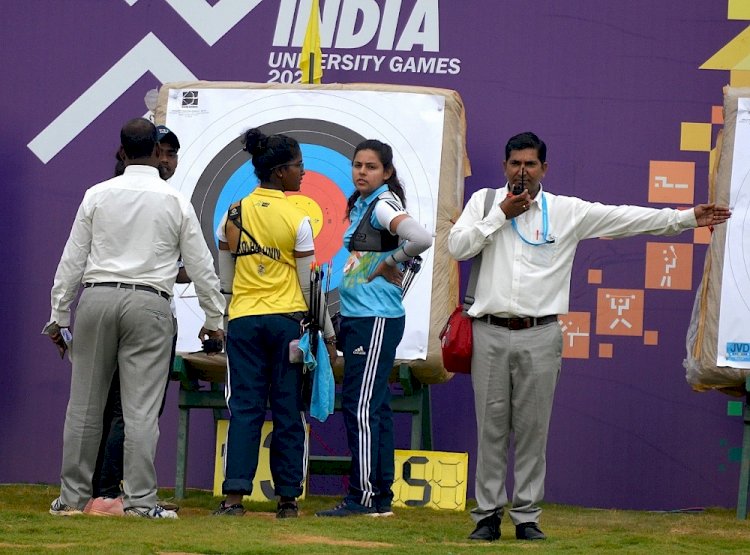 Bhubaneswar: There are few better ways to celebrate your birthday. Whatever celebration Priyanka Thakran was planning for her big day, at the back of her mind she hoped the cause woud be doubled. And sure enough by the end of the girls recurve archery competition it was.

Thakran kicked off her day beating Kolhan University’s Basanti Biruah in the round of 16 and then outclassed Durgesh Goswami in the quarterfinal. This meant she was drawn up againt heavy favourite Komalika Bari in the semi final.

“Obviously I knew that she was one of the best archers in the competition, but at the end of the day, you have to focus on yourself and let the opponent focus on themselves,” Thakran said. And that’s exactly what she did. The duo were neck in neck after the first two sets, but it was Thakran who took the early lead in the third to the delight of her teammates loudly cheering her every shot. The Maharishi Dayanand University, Rohtak product started off with a 10 and relled off two nines to leave Bari in her wake and took a 4-2 lead.

A tie in the fourth meant the fifth set had all to play for. In a tense finish Bari turned the tables on Thakran, to take the match into a shoot off. Despite the pressure and the relative experience of her opponent, it was Thakran who held her nerve to progress to the final – and a chance to become the first gold medalist in the event at the Khelo India University Games 2020.

In the aftermath of the upset Bari rued that she was hurrying into her shots. In sharp contrast Thakran took it slow – often pushing the time clock right to the limit before releasing her shot. She pushed it far enough to even unnerve her coach and teammates. “After the first set they were asking me to be careful of the timer and suggested I release earlier,” she said, “but I knew what I was doing. I needed that extra moment, it was working for me.”

Thakran started shooting as a Class XI student in Amity International School, Gurugram, on a whim because a lot of her classmates were also participating in the sport. “When I started, I was doing well enough in the first few days for people to tell me I should take it seriously,” she said. At the 2018 Nationals, Thakran was part of the Haryana team that won silver in the team event, and that she said is the extent of her repertoire.

Bari’s coach Anil Kumar was effusive in his praise for the Gurugram girl too. “This is what makes Archery a great sport. It isn’t about reputation it is about who can keep their nerves on the day,” he said. “She shot well throughout the day and deserves to be in the final.”