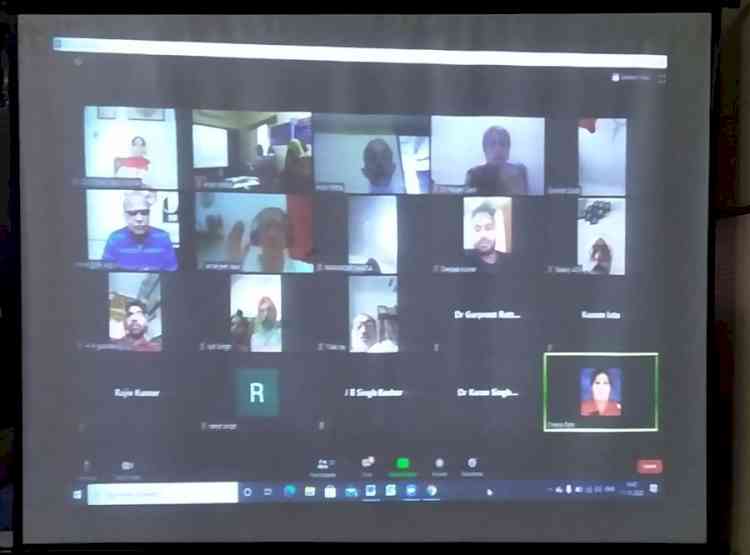 Ludhiana: While expressing deep anguish at the increasing number of cases of all sorts of violence against women, the experts while addressing a webinar organised by the Social Thinkers Forum Ludhiana strongly opined that there is urgent need to change the feudal psychology and patriarchal value system in the society so as to give appropriate respect to the women folk. The role of the state is very important in such situations for a speedy justice to the victim. Therefore the police has to act professionally without any duress from the political masters. This demands urgent police reforms which are due for several decades.

Addressing the webinar Mitter Sen Meet, former district attorney said that there are several laws pertaining to the violence against women. But their implementation is very faulty. As a result the accused go scot free and conviction rate is very less. Investigation done by the police is centred around the victim including her medical examination and questioning. Ironically no medical examination is done of the accused which is very important to ascertain the truth in case of sexual violence.

Dr Param Saini while speaking on the Psychological impact in such crimes said that our police is highly insensitive in such cases She has found that their training to question the victim is totally faulty and biased in most of the cases. They move with the presumption that woman victim is not speaking truth particularly if she is from socially, culturally and economically backward community.  This hurts the victim hard and she is further pushed in to extreme mental trauma which sometimes forces her to commit suicide. A societal mind set change is needed which begins from the basic up bringing in the family about respect to women.

Amarjeet kaur - General Secretary AITUC said that violence against women is known since ancient times and it is depicted in our religious scriptures where we find how the state or the higher ups closed their eyes over violence against women and treated them as a commodity. It is important therefore that the feudal value system is out rightly rejected and scientific temper is developed in the society about equality of gender. Such crimes are committed not against the girls only but even children from the same gender and also the already deprived sections of the society. She strongly criticised the statements of some MLAs of Utter  Pradesh that women have to be imparted value system. Such people spread obscurantist ideas and are blatantly anti women. This type of behaviour and thoughts have to be opposed out rightly. We have to unitedly work for positive changes in the laws for gender equality and their implementation.

Dr Gurcharan Kaur Kocher- President Punjab Istri Sabha Ludhana expressed deep concern at the rising violence against women and wished for a societal upsurge against such elements. Deepak Kumar General Secretary  All India Students Federation Ludhiana (AISF) said that they are trying to organize students on such issues with positive inclination.

Dr Arun Mitra convener of the forum said that they will try to take this issue to the ground level. Co convenor M S Bhatia said that it is not a women's issue but issue of whole society and we have to work in unison together.  Large number of persons from different sections of the society participated in the seminar including Inderjit Singh Sodhi Advocate, Kusum Lata, Kulwant Kaur, Ranjit Singh, Dr Rajinder Pal,  Dr Gurpreet Ratan, Ajit Jawadi, Anu Kumari, Rajiv Kumar, Pradeep Sharma etc.

Lord Vishwakarma is founder of craft, architecture and...