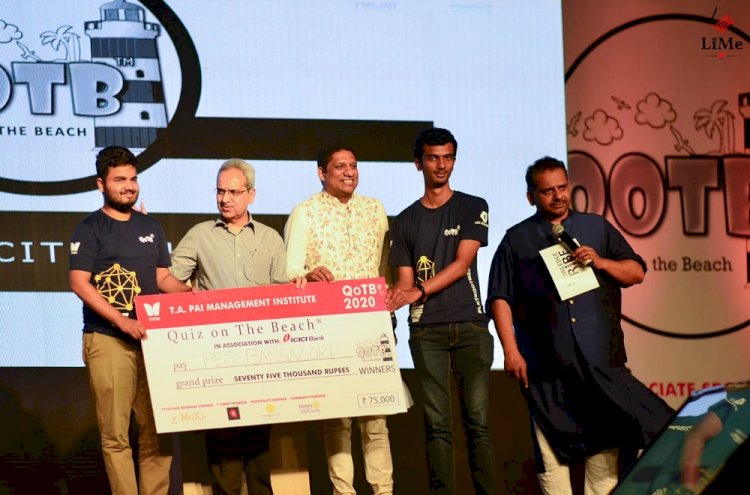 Winners of ‘Quiz on the Beach’.

Manipal: The team of Preetham Upadhya and Akhil Siddharth from PES University Bangalore won the grand finale of the 17th edition of T A Pai Management Institute’s (TAPMI) annual flagship event Quiz on the Beach (QoTB). The quiz was held at the Malpe beach, near Manipal.

The reigning champions, the team from PES University, Bangalore, secured the first place for the second year in a row. The team of Jay Rana and Siddharth Mishra from NMIMS, Mumbai, were the runners up. The participants and the winning teams won prizes worth INR 2 lakhs. The prizes were distributed by Chief Guest Dr Sanjay Chougule, Group Chief Internal Auditor and Group Head Financial Crime Prevention, ICICI Bank Ltd. Mumbai.

The winning team from PES University, Bengaluru, said, “QoTB has become an annual pilgrimage of sorts for us. The entire event is an experience by itself. We are glad we won it again amidst intense competition.”

The event commenced with a special address by Prof. Madhu Veeraraghavan, Director, TAPMI. The institute donated INR 25,000 to Hosabelaku Orphanage in Manipal as part of a community initiative of QoTB in partnership with the Rotary Udupi Royal. The cheque was handed over by Former Assistant Governor Rotarian Balakrishna Maddodi and the President Rotarian B. K. Yeshwanth.

Since its inception in 2003, the unique concept of quizzing on the beach has grown by leaps and bounds over the years. Students from over 400 institutes, including top-ranked institutes like the IIMs, IITs, NITs, SP Jain, IIFT, BITS Pilani and others were part of the quiz extravaganza.

Revamp of footpaths in full swing at PU

Induction program for parents of new entrants to nursery...