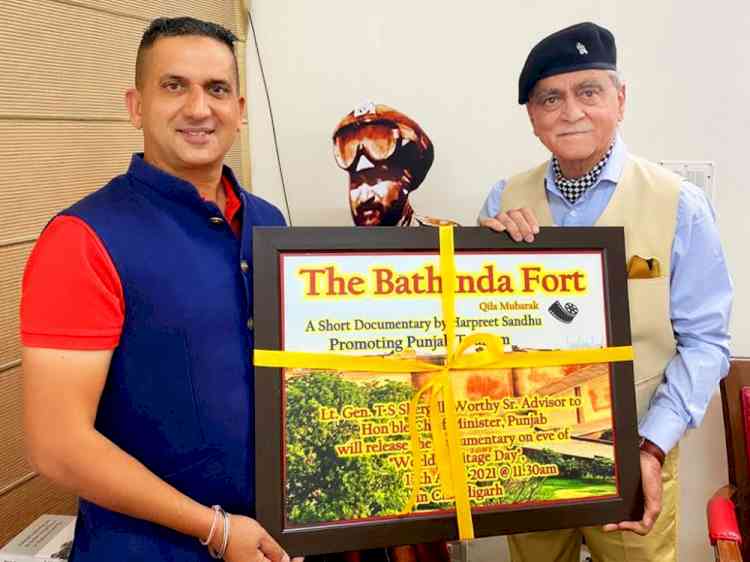 Ludhiana: On the eve of World Heritage Day, documentary film “The Bathinda Fort”, to promote Punjab Tourism Heritage Site, was   released by Sr. Advisor to Chief Minister, Punjab Lt. Gen T.S Shergill, film made by City Lawyer Harpreet Sandhu. As World Heritage Day is observed around the globe to restore and conserve such historical sites.

The documentary film depicts Bathinda Fort, the magnificent historic monument of national importance and the oldest surviving Fort in India built around Sixth century. This fort has historical relevance related to the first women Empress Razia Sultan, who was kept as a prisoner in this fort, later she escaped by jumping from a balcony. This three storied structure Fort has been designed purely in Mughal design and is worth to witness. This Fort is also known as Govindgarh Fort, having a historical relevance with Tenth Sikh Guru, Guru Gobind Singh, who visited this Fort in year 1705.

Sr Advisor to CM Punjab Lt. Gen T.S Shergill, after having the online preview of Documentary film, urged people of Punjab to must watch this beautifully prepared documentary showcasing the glimpse of this Heritage Site and said that, this Documentary will definitely help in boosting Punjab Tourism as most of people are still unaware of this Heritage site in Bathinda.  He further appreciated the dedicated efforts of Advocate Harpreet Sandhu for making this excellent documentary which will help to promote Punjab’s rich and cultural Heritage and help the youth to get into their roots.

The maker of documentary film, City Lawyer Harpreet Sandhu said that his passion for photography on heritage sites encouraged him to utilize his time constructively during lockdown and he made this film with a sole aim to project the Heritage site of Punjab Tourism “The Bathinda Fort” within people of Punjab and the Punjabi’s settled across the Globe.

After the release of the Documentary Lt. Gen Shergill Sr. Advisor to Chief Minister, Punjab acknowledged the film as a good work done by Lawyer Harpreet Sandhu.

The photographs was taken during launch of documentary film by Lt Gen T S Shergill, Sr Advisor to CM Punjab along with Director of film Harpreet Sandhu.