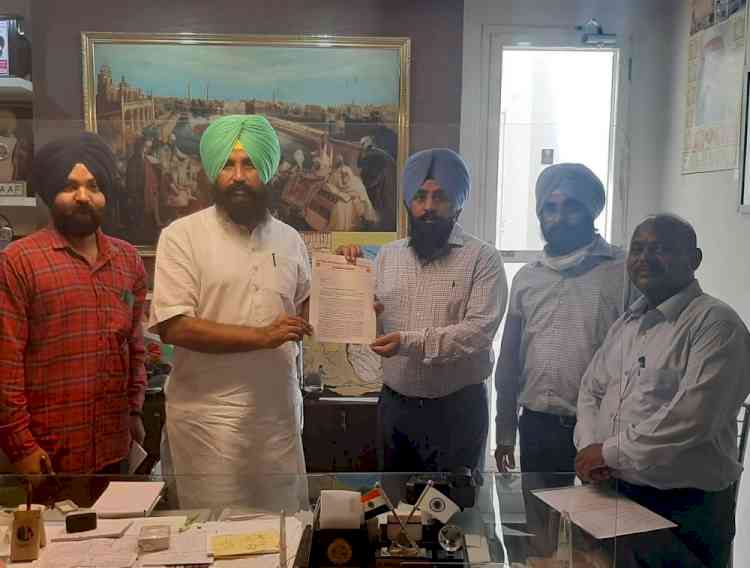 Ludhiana: Today, office-bearers of NZIEA- Northern Zone Insurance Employees Association, a Leading Association of LIC Employees', under the leadership of Amarjit Singh, Divisional Secretary Ludhiana Division met Lok Insaaf Party Supremo Simarjeet Singh Bains, and handed over the memorandum to him against their opposition to the proposed IPO in LIC.

The delegation said that recently when the nation  has  celebrated the  64th  anniversary  of  the  most successful public sector financial institution. There are serious  concerns  on  its  very  foundational  objectives  and character; whether LIC will remain 100 percent government owned or the government will dilute  its  equity  holding  through  initial  public  offering  (IPO) . The Union Finance Minister  announced during her second Budget Speech on February 01 that the government will list LIC in the stock exchange and sell part of its stake via Initial Public Offer (IPO). The advisor to guide the government on issues relating to IPO has already been finalised.  It is expected to raise between Rs. 80-100 thousand crore by selling around 10 percent of its equity holding.  They said that LIC has helped the nation industrialise at a rapid pace.  With a capital of Rs.5 crore  which  was  raised  to  Rs.100  crore  in  2011, LIC was performing spectacularly well even in these troubled times. LIC has   emerged as  the  single  largest institutional investor in the Indian economy, with a customer base of over 40 crore. The LIC has registered a growth of 25.17% in its first year premium by mobilising highest ever figure of Rs.1,77,977.07 crore in the financial year 2019-20. LIC’s Pension and Group Business created a history by crossing the magical figure of one lakh crore and mobilising Rs.1,26,696.21 crore and showing a growth of 39.46%. The Corporation collected a total premium income of Rs. 3,79,062.56 crore in the financial year clocking a growth rate of 12.42%. The LIC’s gross total income grew to Rs. 6,15,882.94 crore showing a growth of 9.83%. Total Assets of the Corporation stood at Rs. 31,96,214.81 crore as at 31.03.2020..  It generates annually around Rs.  4 lakh crore  as  investible  fund.    The LIC  has  an unmatched  claim  settlement  record.      This  great  institution  has  grown  and expanded  by  generating  internal  resources  without  any  additional  capital  from  the government.  .  It is the largest life insurance company in the world in terms of number of policies. Even after over two decades of competition in the life insurance business, the LIC stands tall with a market share of more than 73 per cent. The LIC has the proud distinction of contributing more than 25 per cent to the total budgetary efforts of the government of India. The LIC has recently paid a dividend of Rs.2611 crore to the government of India against an initial equity of Rs.100 crore. the total dividend paid by LIC till date since its inception is a huge Rs.26,005.38 crore

Against the arguments for IPO, they further informed that the LIC has always been accountable to the nation through parliament  with  an unblemished record  of protecting the interests  of the policyholders Since it generate enormous investible surplus every year, the argument that listing will help access to capital too has no meaning. The argument that unlocking the value  of  LIC  will  benefit  the Indian  public  is  not sustainable  as  retail  investors in  stock market constitute just around 3% of the population. . The LIC is a transparent and efficient Board managed institution. It comes out with Public Disclosures every quarter. It submits Report of its functioning every month to the Regulator IRDAI. They further said that Listing of LIC will amount to wanton destruction of the premier public sector financial institution in the country. The LIC mobilises small savings of the people and makes them available for national development, as domestic savings play a very important role in the national economies and many economists worldwide hold the view that foreign capital is a poor substitute for domestic savings. In a situation where the country needs huge resources for development, it is necessary the government should exercise control over the domestic and more importantly the household savings.  The vision of Atmanirbhar Bharat of the Prime Minister can be successful only when an institution which generates enormous investible surplus every year must remain hundred percent under government control.

They impressed upon Bains that the move to sell the equity of LIC by Government of India will severely impact the economy and vulnerable sections of the Indian people. The social objective of providing insurance cover to the weaker sections will receive a set-back. The aim to expand insurance in the unprofitable rural areas too will suffer. Hence disturbing the character of LIC will ultimately harm the interests of the national economy and the poorer sections of the Indian population.

Free dairy training to be given to for people hailing from...