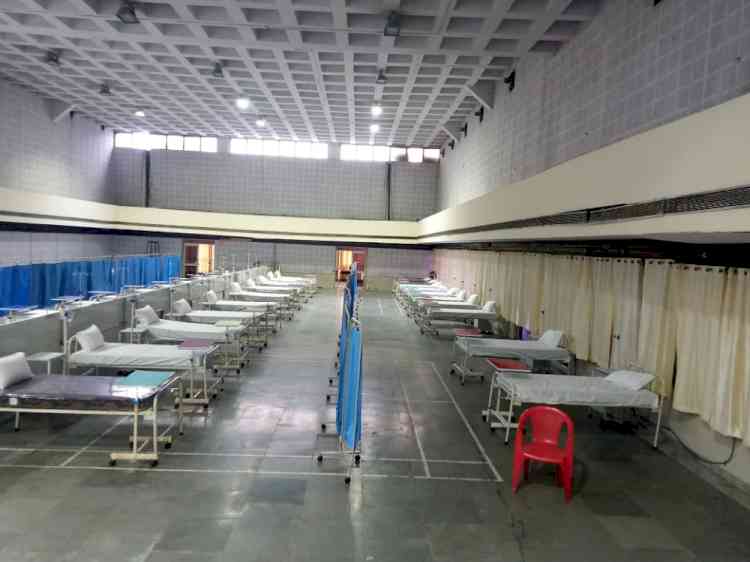 New Delhi: NTPC, the largest energy conglomerate of the country has not only ensured uninterrupted power supply to the country during the second wave of COVID-19 but also has reached out to the society and has made significant effort to combat the spread of COVID-19 by enhancing medical infrastructure in different parts of the country.

While there was acute shortage of Oxygen beds across the country, NTPC came forward and developed more than 600 Oxygen beds and 1200 isolation beds in its different projects and surroundings on war footing basis in a span of one week which proved to be life saviour for many including the general public. NTPC has been working in close coordination with the state and district administration and has augmented medical infrastructure even at remote locations.  Amidst the surge in COVID-19 cases specially in Delhi and NCR, NTPC stepped up its efforts and created 200 oxygen supported beds and 140 isolation beds in NCR alone which came as a big relief to Covid patients. This infrastructure in NCR which has been set up at Dadri, Noida and Badarur has the facility of Oxygen support, COVID testing, invasive and non-invasive ventilators besides 24X7 nursing and medical care. This has been created at a cost of Rs 30 Crores. NTPC has engaged more than 40 doctors, hundreds of paramedical and supporting staff and 07 round the clock Oxygen supported Ambulances to manage this facility.

A 500 bedded hospital at a cost of Rs 400 Crores, with state of the art facility constructed by NTPC in Sundragarh, Odisha in a record time has been converted into a COVID hospital during the pandemic which is catering to lakhs of people of that area. Apart from providing various medical equipment, NTPC has augmented the facility by providing 20 ventilators which helped in treating numerous critical patients. Further, considering the demand of critical care, NTPC is providing additional 40 ventilators to this hospital. NTPC Darlipali is also providing assistance for setting up 30 ICU beds in Jharsuguda.

NTPC has created 250 Oxygen supported beds, 20 HDUs and 10 ICUs in District hospital of Khargone, Madhya Pradesh at a cost of Rs 2.24 Crore. This facility at remote location has come as a boon to the public at large, saving lives of many during the unprecedented COVID-19. At Jharkhand, NTPC, Northkaranpura has provided financial assistance of 53 Lakhs to set up 15 ICU beds along with Oxygen supply system at Community Health Centre, Tandwa, Dist Chatra, Jharkhand. Apart from that, Pakri Barwadhi, a mining project of NTPC at Hazaribagh, Jharkhand has made centralised medical Gas pipeline system at RIMS, Ranchi and ITKETI, Ranchi and Hazaribagh Medical College at a cost of Rs 1 Crore which is supplying Oxygen to more than 1000 beds. Many projects of NTPC are located in remote parts of the country and they have contributed in big way in developing and augmenting medical infrastructure in their vicinity.

During the ongoing crisis, various NTPC projects has provided more than 2000 Industrial cylinders to district administrations which are being converted and used as Medical Oxygen cylinders.  Sensing the expected rise in demand for oxygen, which is the only lifesaving Gas for COVID patients, NTPC is playing a major role in creating infrastructure of Oxygen generation across the country by setting up more than 2 dozens of Oxygen Generation plants with some of them having the facility of bottling and refilling Oxygen cylinders. Out of these, 09 PSA type plants and 02 bottling plants are being set up in NCR only which will start operating from this month itself in phased wise manner. A 600 LPM PSA type Oxygen plant is being set up at CHC, Chhabra, Dist Baran, Rajasthan at a cost of nearly one Crore for which purchase order has already been placed. The other projects of NTPC which are setting up Oxygen plants in their respective district or locality are Rihand, Unchahar in UP, Vinchyachal, Gadarwara, Khargone in MP and Darlipali in Odisha. A total of more than Rs 12 Crore is being spent by NTPC in setting up these Oxygen Generation plants.

NTPC has not only been providing essential medicines of COVID to the people of its surrounding but also has been providing medical facilities to them. NTPC Vindhyachal alone has treated more than 250 people infected with COVID of their vicinity along with providing treatment to its own workforce. Besides augmenting and strengthening the medical infrastructure across its operations, NTPC has also undertaken massive awareness drive to raise awareness among the communities on the second wave of Covid-19. An initiative of mass campaign for COVID in Collaboration with SP, Singrauli has been undertaken with two dedicated Ambulances with the facility of Audio Visuals by NTPC Vindhyachal which has touched more than 5 lakhs beneficiaries in 300 villages. In addition all NTPC stations have lend their hands in mass distribution of PPE Kits, masks, sanitisers, dry ration and other necessary items for community welfare. Also, NTPC projects in association with its CISF Fire wing are taking up mass sanitization programme in more than hundreds of villages and towns. The ladies’ clubs of NTPC and NTPC employees NGO has also come forward and extended a helping hand to the society during the crisis.

NTPC has done its best to inoculate its employees, their dependents and other stakeholders across all NTPC plants. Till date, NTPC has vaccinated more than 70,000 people across its operations which include employees, their dependents and community people as well. Mass vaccination camps have been organised at various locations. Further, NTPC is not only targeting to vaccinate 100% of its employees, family members and associates but also has the plan to vaccinate people living in the surrounding. NTPC Darlipali is procuring 10,000 vaccines for people of its surroundings.

NTPC believes in philosophy of people beyond profit and has a deep sense of giving back to the society. The best efforts of NTPC has brought silver lining in fighting COVID 19 and helping the society at large to get over the crisis. The medical as well as Oxygen infrastructure being created by NTPC is not only helping during the ongoing pandemic but also it will go a long way in coping up with such crisis in future also.  NTPC as an organisation stands together with the society during the crisis and committed to its corporate responsibility, as always it has been.

Social taboos get ready to be quashed