‘Notions of India’, an international design competition by Tata Steel, announces its winners 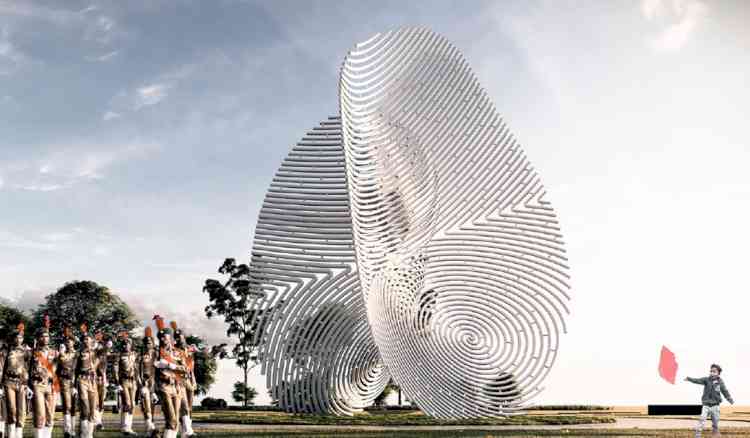 Chandigarh, October 11, 2021: Notions of India, an international design competition organised by Tata Structura, witnessed an impressive participation in its second edition and concluded on Gandhi Jayanti with “Billion Impressions” emerging as the winning design.

“Billion Impressions” by Ar Namdev Talluru and Ar J K Jayakanth was adjudged the winning design. “The Knot” by Midori Architects and “National Unity Pavilion” by Collaborative Architecture took the honours for the second and third place. Tata Steel announced that the winning design will be erected and installed in the city of Ranchi. Sumit Kumar Sharma from School of Planning & Architecture was adjudged the winner in the Students’ category for his design, “The Spirit”.

On this occasion, T V Narendran, CEO & MD, Tata Steel, said: “Steel is a very important material for the future. Designers conceptualize the beauty and Tata Steel, as a steel maker, provides the functionality to deliver that beauty. Tata Structura is one such critical offering, which helps showcase the beauty of steel. Notions of India is our endeavour to encourage the most creative and talented engineers and architects to bring to life innovative designs enabled by steel. I congratulate the winners and all the participants of the design competition. I would also like to thank the jury members for being a part of this journey and enabling a very healthy discussion and selection.”

As the keynote speaker for the event, Rajeev Sethi, Chairman & Founder Trustee - The Asian Heritage Foundation and Chairperson of the Notions of India jury, said: “I see this competition as a very reliable promise of implementation. Hundreds of samples of context-rich ideas in the competition were submitted but only a few were selected after the rigorous examination by the jury panel. I would like to congratulate all the winners and participants who participated in this novel endeavour of Notions of India. The way ahead remains full of possibilities. Replete with potential, the excitement of collaboration between Corporate India and Creative India remain huge.”

The finale, held on a virtual platform and attended by more than 400 technocrats, witnessed some of the brightest architects and engineers from across the world display their imagination that personifies India of today and tomorrow. The event was graced by the senior leadership team of Tata Steel including Chanakya Chaudhary, Vice President, Corporate Services, and Rajeev Singhal, Vice President (M&S), Flat Products.

As part of the competition’s evaluation process, a total of 12 leading designs were shortlisted and declared as the finalists on August 15, 2021, India’s 75th Independence Day.

Summarising the overall participation received from the professional community, Sarita Vijayan, Curator, Notions of India stated: “Not only have Indian designers, but the international design professionals too have risen to this call. This is testimony that the ‘Notions of India’ competition has been well received by the design community.”

This thrilling and enriching concept is an endeavour of Tata Steel to encourage architects and designers to be bolder, experimental, and innovative, and create remarkable iconic steel structures that epitomise the essence of a New India.

Ambuja Cements Limited develops science based targets in line with its net zero...