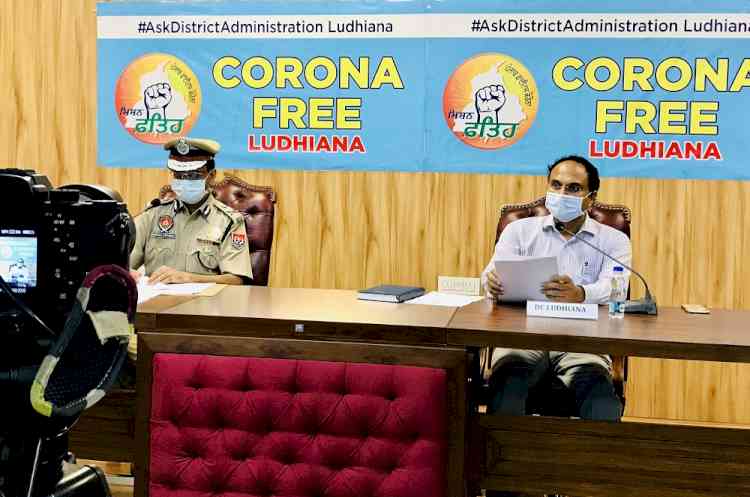 Ludhiana: In a bid to connect directly with the Ludhiana residents for their queries related to COVID 19 and to educate the masses, Deputy Commissioner Mr Varinder Sharma and Commissioner of Police Mr Rakesh Kumar Agrawal today held #AskDistrictAdministration interactive Facebook live session. During this session, both the senior officers answered several queries of the residents and also urged them to follow government directions.
In view of the rising number of positive COVID 19 cases in the district, Deputy Commissioner Mr Varinder Sharma informed that the residents are advised not to visit the government offices for any work and should instead submit their applications/complaints/memorandums through email/whatsapp/call. Mr Sharma said that the redressal of problems of residents is also necessary, but the safety and well being of government officials cannot be ignored as well in public interest. He said that the number of positive cases is increasing with each passing day, and there is need to break the chain.
He said that now there were 3 containment and 9 micro-containment zones in district, but after reviewing with Commissioner of Police and Civil Surgeon, now there is no containment zone in the District, and only seven micro-containment zones are left. The micro-containment zones include Kucha No 5 in Field Ganj, Street No 3 in Vijay Nagar, Blocks B & C in GK Estate, from Lucky Hairdresser to RS Model School in Navi Abadi Khanna, from house no 37 to 76 in Kidwai Nagar, house no 161 to 209 in Janpath Colony near Ayali and from Sohal Building Workshop to Gas Agency in Street No 3 in Guru Gobind Singh Nagar, Daba Road, here.
While replying to a query, Mr Rakesh Kumar Agrawal said that till date, a total of 56 police officials have been found positive, out of which 28 have been cured and returned to duties, 27 are still undergoing treatment and one ACP passed away unfortunately.
He urged the residents coming from foreign countries to strictly follow the government directions and informed that two FIRs and 8 challans have been issued of people who break home quarantine, 7 FIRs have been registered against persons who failed to maintain social distancing and indulged in crowding, while more than 28000 challans have been issued against persons for not wearing masks. “We do not want to take action against any person, so people should follow all government directions. Any person breaking law would be strictly dealt with,” he warned.
He said that lockdown is not a permanent solution in dealing with the COVID 19 pandemic, but participation of all stakeholders is necessary to keep ourselves safe. He said that if any person finds any person indulging into any violation, they should immediately call at police control room number 112.
The Deputy Commissioner informed that as per the new directions of the Punjab government, there is complete ban on all kinds of gatherings in the district. He said that not more than 5 persons can gather at any place at any given time and there is strictly ban on organising social functions such as birthday parties, kitty parties etc.
He said that the #AskDistrictAdministration Facebook session would be held at 7 pm on every Wednesday and urged the residents to submit their questions on the official Facebook pages of District Public Relations Office Ludhiana and Commissioner of Police Ludhiana.

All covid curbs in Punjab extended till May 31