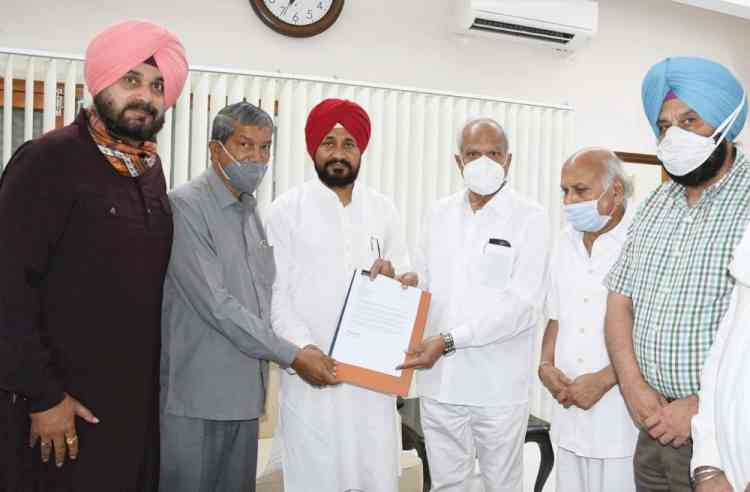 Chandigarh, Sep 20 (IANS) Newly-appointed Punjab Chief Minister Charanjit Singh Channi, 58, will have two Deputy Chief Ministers and they will take the oath of office on Monday at a ceremony here likely to be attended by Congress leader Rahul Gandhi.

Party sources said one of the Deputy Chief Ministers would be a Jat Sikh and the other one could be from the Hindu community.

It is learnt that sitting Cabinet ministers Sukhjinder Singh Randhawa and Brahm Singh Mohindra, who is known for his proximity with outgoing Chief Minister Amarinder Singh, have been cleared for the posts of the Deputy Chief Minister.

Former Chandigarh MP and AICCC treasurer Pawan Bansal in a tweet confirmed the appointment of Randhawa and Mohindra as the deputies to the Chief Minister.

"Heartiest congratulations to @Charnjit_channi for elevation as #PunjabCM and @BrahmMohindra & @Sukhjinder_INC as Dy CMs. Best wishes for their grand success in the service of Punjab under the leadership of Smt. Sonia Gandhi and Sh. @RahulGandhi," Bansal tweeted.

"It gives me immense pleasure to announce that Sh. Charanjit Singh Channi has been unanimously elected as the Leader of the Congress Legislature Party of Punjab," state party in-charge Harish Rawat told the media on Sunday.

The new Chief Minister and his expected new Cabinet comes just months ahead of the Assembly polls in Punjab.

Ahead of his oath-taking ceremony, the chief minister-designate on Monday morning paid obeisance at Gurdwara Katalgarh Sahib at Chamkaur Sahib, his home constituency.

Channi was accompanied by his family.

Three-time legislator from the Chamkaur Sahib Assembly constituency in Rupnagar district, Channi had joined the Congress in 2012 and was holding the portfolios of Technical Education, Industrial Training, Employment Generation and Tourism and Cultural Affairs in the outgoing cabinet.

Meanwhile, the political tussle within the party has not ended with the announcement of Channi, the first Dalit Chief Minister of Punjab.

"On the swearing-in day of Sh @Charnjit_channi as Chief Minister, Mr Rawats's statement that "elections will be fought under Sidhu", is baffling. It's likely to undermine CM's authority but also negate the very 'raison d'etre' of his selection for this position," he tweeted.

Outgoing Chief Minister Amarinder Singh on Sunday greeted Channi, by saying, "My best wishes to Charanjit Singh Channi. I hope he's able to keep the border state of Punjab safe and protect our people from the growing security threat from across the border."

Amarinder Singh on Saturday resigned from his post as the Chief Minister after months of political tussle, saying he stepped down as he felt 'humiliated'.

At the same time, he said that the "future politics option is always there and I will use that option".

Amarinder Singh also termed Sidhu as a 'disaster' who would not be acceptable to him as his successor.

It is learnt that Amarinder Singh is not attending the oath-taking ceremony of his successor.

Ludhiana must also get one light house project: Ar Sanjay...

Don’t plan night events as curfew could be imposed any...