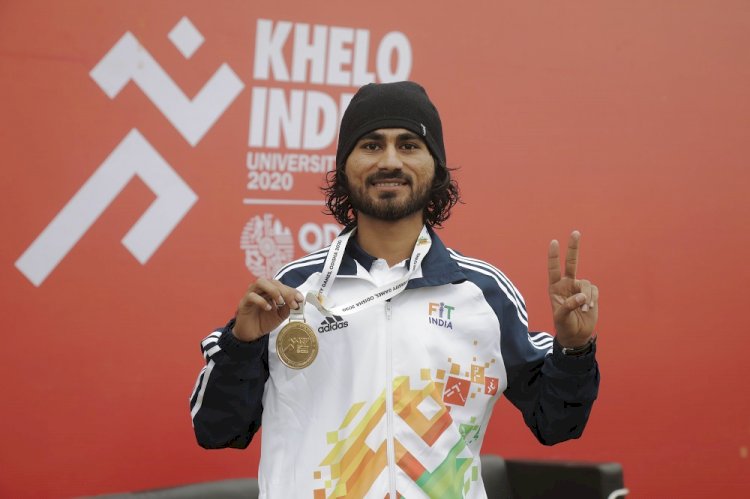 Bhubaneswar: Even for a family of high achievers, Narendra Pratap Singh is exceptional. If winning the 10,000m men’s event on the opening day of the athletics at the Khelo India University Games 2020 was not enough, he broke his own 5000m University record on Saturday.

“The 5k is my favourite event,” the 23-year old, a B.Com student at Mangalore University, confessed. “Recovery was going to be the biggest challenge, and I was surprised by how good I felt today actually.”

A huge fan of Ethiopia’s Kenenisa Bekele, Narendra admitted to watching some old videos earlier in the day, hoping to get fired up for his pet event.

It seems to have worked, seeing the way he dominated the field, his time of 14:18:19 almost ten minutes faster than his teammate Adish, who finished second. It was also almost a minute quicker than the previous record that he himself had set at the Inter-University Games earlier this year.

Narendra’s father, an employee in UP Police, was insistent that all three of his sons participate in outdoor activities. Narendra, the oldest of the trio, embraced this wholeheartedly.

“I hated being stuck in classrooms, so I would seize any opportunity to get out,” he said. Over the years, he played football, cricket, even hockey, all on the pretext of getting those few days off from school. It was athletics though that was closest to his heart, and unsurprisingly the one he was most talented at.

Soon enough he was drafted into a SAI Academy, thanks to the famous Vijendra Singh, under who’s tutelage Narendra has been ever since. “Vijendra sir also comes from UP, so he had heard about my running from coaches there,” he explained. “He called me for a trial and then enrolled me in the hostel.”

Having set two records in the last two meets, Narendra hoped he could head back to training in a similar frame of mind. “The next stop is the Federation Cup of course, but to be honest I am really looking forward to the nationals later this year,” he said.

Narendra readily admitted that a career based in academics is not one that he will ever succeed at. “My younger brothers are preparing for the UPSC exams and I am preparing for races.” he laughed. “But, if you think about it, both of them are long distance hauls.”

Cheque of Rs 1.50 lakh handed over to mother of International...