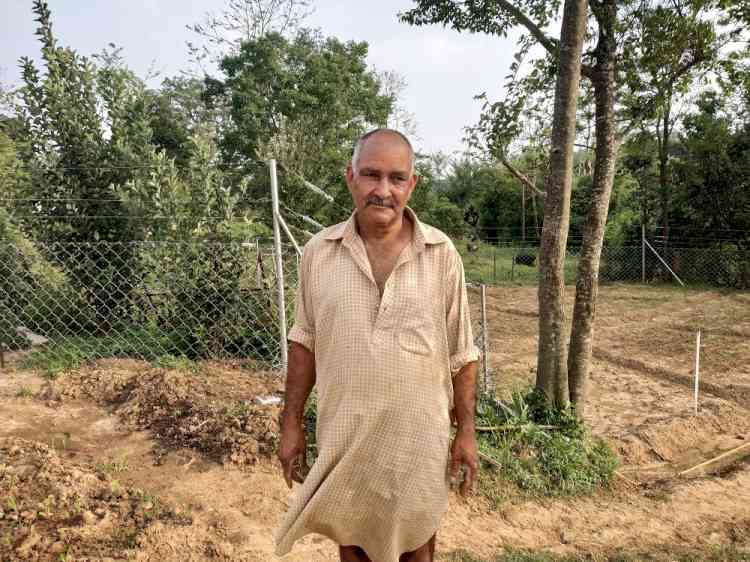 Dharamshala: To increase the production and quality of crops, the Himachal Government is promoting the latest agricultural technology. With a view to diversify agriculture, new incentive schemes have been started for farmers and orchardists. But in the last few years, nuisance created by stray and wild animals has compelled the farmers to give up farming at many places. Thus, turning farming into a loss deal. Observing this, the State Government came up with the Mukhyamantri Khet Sansarakshan Yojna (MMKSY) to protect their crops from stray and wild animals.

“Under the Mukhyamantri Khet Sanrakshan Yojna, in the year 2019-20, a sum of Rs. 10.31 crore was spent on 1,26,843 meters solar fencing on the land of 784 farmers across the district. The scheme provides a subsidy of 50 percent on barbed wire and chain link fencing, 70 per cent on composite fencing and 85 per cent on solar fencing,” said  DC Kangra.

Rajendra Kumar, Panchayat Pradhan, who lives at Kuthama near Gaggal Airport, said, My  land had become barren in the last 10 years due to stray and wild animals, including pigs, monkeys and abandoned animals. These animals did not allow any cropping on his land. Dejected, he gave up farming. But, when I  heard about the Mukhyamantri Khet Sansarakshan Yojna, being run by the Agriculture Department, I decided to take full advantage of it.”

No doubt that this is a unique and innovative scheme of the State Govt., in which farmers and gardeners reaping full advantage of it, can re-cultivate their vacant land. Rajendra says that he has done solar fencing in an area of 320 meters on about 10 kanals of land. Out of a total cost of Rs. 358,543, he gave Rs. 107,562 as his share and received a subsidy of Rs 250,980 from the Agriculture Department.

Another beneficiary of the scheme, Mithila Sharma of Siholpuri village under Shahpur Panchayat, says that there was so much terror of nilgai, pigs and monkeys on their fields that they did not allow even turmeric or greens to be harvested apart from traditional crops. On finding out the plan, they put a fence on their land in an area of 310 meters. It cost her Rs. 336,927. Mithila deposited Rs. 101,078 as her share while the department provided a subsidy of Rs 235,849.

Expressing their gratitude to the HP Govt., both beneficiaries say that this innovative scheme helped them like other farmers reclaiming their unused land.

Narendra Dhiman, Joint Director, Agriculture, Northern Region at Dharamshala, said, “Fencing, driven by solar energy, is done around the farmers' fields under the scheme. No electricity is used to run it. As soon as an animal comes in contact with the wire, feeling shocked, it runs away. Due to the light current, a person does not suffer any harm even when coming in direct contact.”

A woman dies due to corona in Kangra on Saturday

NephroPlus scales up operation across 120 centres in India...