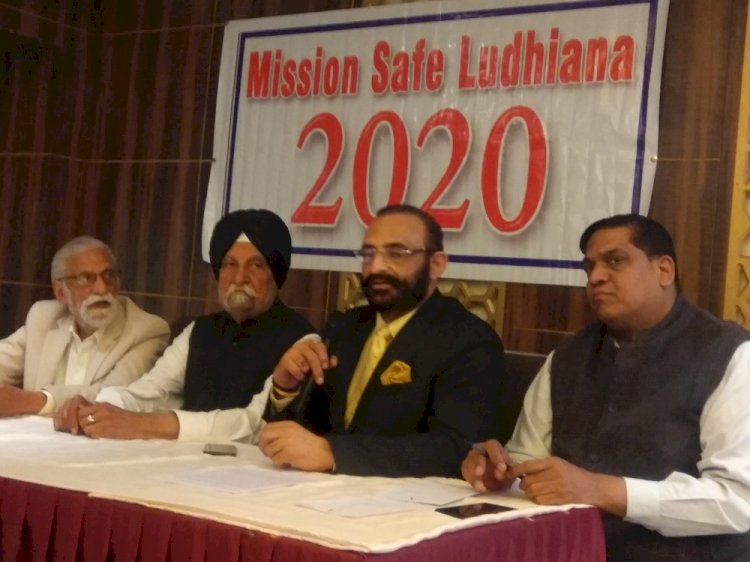 Ludhiana: Ludhiana witnesses a death on city roads every day. The official figures listed at least 40 deaths in the month of January this year.  Quoting the official data of approximately 1100 deaths in last 3 years and an average of 350 deaths and 500 seriously injured every year in road accidents, Dr Kamal Soi Chairman of the NGO Raahat - The Safe Community Foundation while addressing a press conference here today gave a peep into frightening reality of road accidents.

Dr Soi, a Member- National Road Safety Council of the Ministry of Road Transport & Highways, highlighted the initiatives taken in the last one month and rolled out the way forward under “Mission Safe Ludhiana 2020”. Central to his strong message was lackadaisical attitude of law enforcement agencies and also the lacking interest of the politicians in talking about the need for regulating traffic habits.

Giving details of the official data, Dr Soi said the fatality rate of accidents in the city was 68 per cent making Ludhiana among the cities with most dangerous roads in the entire country.

Listing out a series of activities to be undertaken as part of the mission to achieve reduced number of deaths in road accidents by 25% & to help ensuring lesser jams & ensure safe reliable & ease of mobility in the City, he said “we will begin with a Road Safety Prayer’ asking public to make a commitment on driving safely and carrying all valid documents.

Dr Soi said that special focus has to be the implementation of High Security Registration Plates in Ludhiana . he urged government to expedite the process of implementation of high security registration plates (HSRP) on new as well as old vehicles as this is a issue of National Security and can go a long way in curbing vehicle borne crimes.  He informed that State Transport Department has already implemented restrictions for any transaction without affixation of HSRP. and the process of applying is now being made easier as customer can now apply HSRP online for old/existing vehicles in addition to implementation of appointment system for affixation of HSRP , but implementation of HSRP on Old vehicles and lack of enforcement still remains a major challenge. Temper proof HSRP plates are affixed with non-removable and non-reusable snap locks and their Reflectivity index improves vision specially at night and during foggy season.

Dr Soi added “The mission has chalked out a long list of activities to educate people about the Motor Vehicle Amended Bill 2019”.  He spelt details about the Speed Governors for Controlling Speed in Commercial Vehicles, GPS in Public Service Vehicles, Safe Outdoor Advertising Policy and Training of Police Personnel.

Inauguration of health and wellness centres and new buildings...