Message for youth in contemporary context 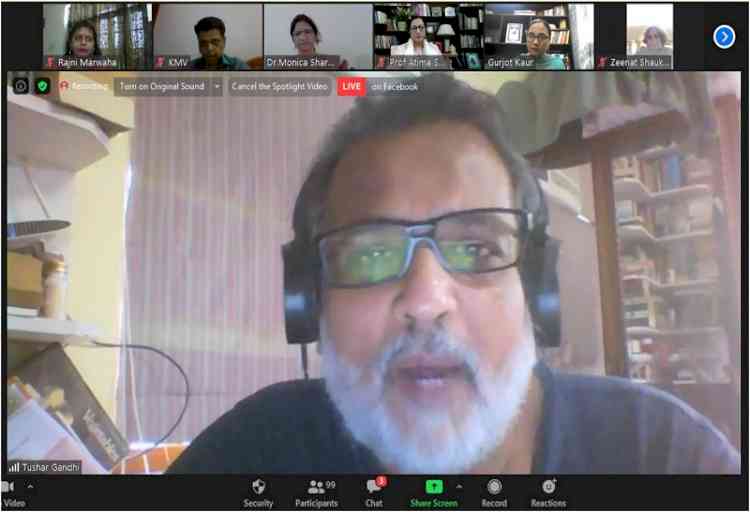 Jalandhar: Kanya Maha Vidyalaya organized a webinar on Mahatma Gandhi: Message for Youth in Contemporary Context. The webinar was organized by the Department of History under the aegis of Gandhian Studies Centre. The guest for the webinar was Mr Tushar Gandhi, great grandson of Mahatma Gandhi. A well known activist & journalist, Mr Tushar has also acted in a film and has authored a book.
The webinar was attended by more than1500 participants from all over India. The webinar commenced with the Gayatri mantra, followed by the welcome address of Principal Prof Dr Atima Sharma Dwivedi. She apprised all the participants about the contribution of KMV in the Indian freedom struggle and also Gandhiji’s recognition of this institution. This was followed by a presentation of various social activities carried out by Gandhian Studies Centre in the last decade by Dr Monica Sharma. Mr Tushar Gandhi during the webinar focused on the contribution of women in the Indian freedom struggle. He especially acknowledged the contribution of Kasturba Gandhi, who he felt has not received recognition that she deserves.  He went on to acknowledge the contribution of other women freedom fighters of this country. He told everyone that he has a reservations for calling Gandhiji a Mahatma as it distanced Gandhiji from the common man. He called upon the youths of the country to act in the present and not wait for the future. He also addressed various queries of the participants ranging from Gandhian Economics in post COVID era to the migrant labour problem, non-violence and education system. Dr Gurjot Kaur, Head, Department of History extended a Vote of Thanks to the guest.
Principal Prof Dr Atima Sharma Dwivedi averred that it is very important that our young generation should be made aware about the contributions and thoughts of our freedom fighters so that they should also feel motivated to work progressively and constructively in the Nation building.